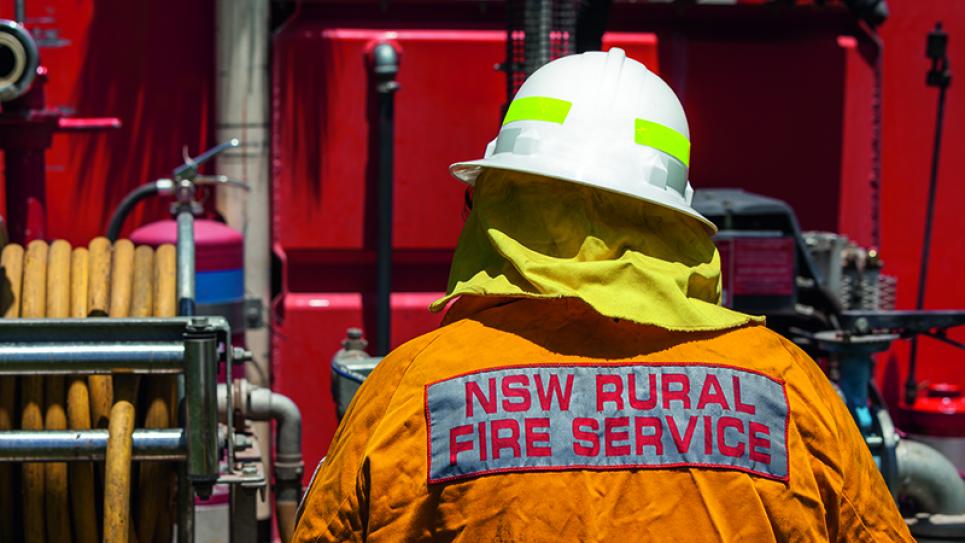 With its often hot and dry climate, Australia has a long history of bush and grass fires. Today, climate change is increasing their frequency as well as severity. Each year, they cause extensive property damage and often even loss of life. In 2016 alone, the fires burned 72,000 hectares.

In New South Wales, a large number of these fires are fought by the NSW Rural Fire Service (NSW RFS). “That was a slightly elevated season for us, but we didn’t consider that an atypically busy season – fairly standard. In September [2017], we were managing 108 bush and grass fires that were out of control, and it is only early spring here”, says David Field, Fire Behavior Analyst at NSW RFS.

To fight these fires effectively, NSW RFS needs to know the weather conditions in the locality of the fire in order to provide the firefighters with accurate forecasts of how the fire will behave and move in the terrain. This is why NSW RFS decided to procure a sounding system that can be easily moved around the state, wherever a fire breaks out.

Covering the gaps was only one part of the story; another was to increase the coverage around significant incidents both spatially and temporally to get more information about the weather of the fire area. This provides a better outcome in firefighting, as the people managing the fire can be provided with more accurate information on the local weather conditions: either confirming the numerical forecast or detecting discrepancies, like stronger wind speeds or lower relative humidity. Thus it is possible to provide early warning to those managing the fire. Local observations also improve the accuracy of the fire spread modelling.

The latest and influential reason for investing in the mobile weather station is the phenomena of a thunderstorm forming immediately above a fire, triggering a fire thunderstorm, also known as pyrocumulonimbus (pyro-cb). This is an unusual but very dangerous phenomenon.

“A fire thunderstorm introduces uncertainty about which way the wind will be traveling. You have gust fronts, downbursts, outflow winds, and such affecting different parts of the fire in ways you cannot forecast. This unpredictability makes it a very dangerous proposition not only to the firefighters but to the public as well.”

At worst, the fire thunderstorms have been previously known to generate a tornado, which introduces an additional destructive force to an already dangerous situation.

Live monitoring of the interaction between a fire's convective column and the atmosphere with upper air soundings makes it possible to identify whether the fire has triggered the generation of a fire thunderstorm.

“We are a government organization, so we ran an open tender process with preset criteria: ruggedness, portability, simplicity of use, and flexibility in terms of being able to use different radio frequencies. MW32 was the winner.”

NSW RFS procured four MW32s in early 2016, so the spring–autumn of 2016–2017 was the first whole season for them. Even so, they have already seen plenty of action, with over 50 launches, helping firefighters anticipate how the fire will travel and provide advance warning of potential danger to local residents.

“They have a pretty hard life here. The last time we conducted a sounding, we had winds travelling 60 kilometers per hour on average, 45 degrees Celsius throughout the day, and incredibly dusty conditions,” Field lists.

“The equipment holds up to the conditions well, and it has been simple and straightforward to use – it works really well for us. The only improvement suggestion is to provide hard cases for them, as the equipment can get thrown in the back of trucks and handled roughly.”

The NSW Rural Fire Service (NSW RFS) is the world’s largest volunteer fire service, with over 74,000 volunteers. The service covers an area of 800,630 square kilometers, which is approximately 10.4 percent of the Australian land mass.

The service’s members attend a range of incidents and activities, such as bush and grass fires, house and structure fires, storm damage, search and rescue, and bush fire mitigation.

The Vaisala MARWIN® Sounding System MW32 provides an atmospheric profile of wind, pressure, temperature and humidity. The data can be used as input into numerical weather prediction models to provide updated observation for more precise predictions.

The system is straightforward to operate using the self-guiding menu, and it can be operated, assembled and disassembled wearing gloves. The MW32 has been designed for demanding use in harsh environments, and rough transportation. It complies with MIL-STD-810G for low and high temperature, temperature shock, sand and dust, wind-driven rain, humidity, salt fog and altitude, as well as vibration, functional shock and transit drop.