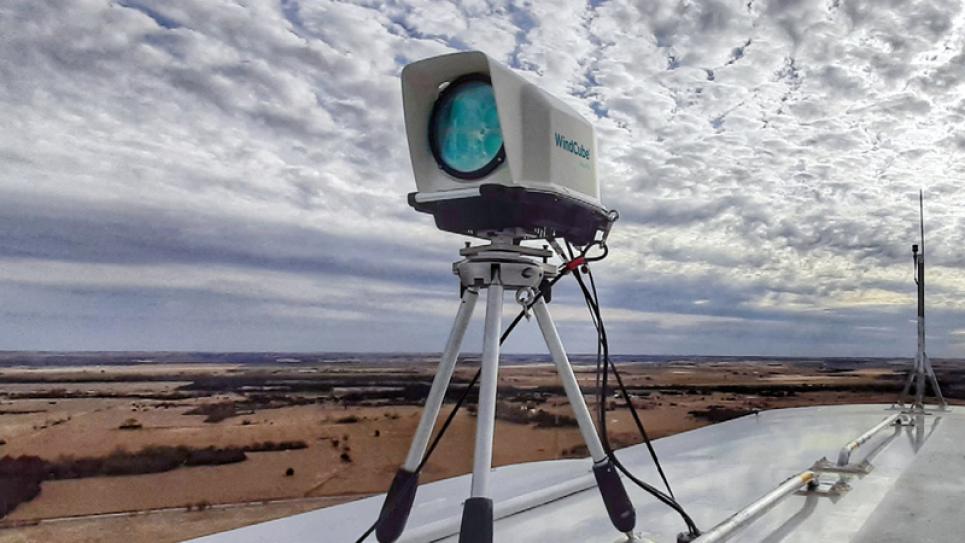 The challenge: See how the technology measures up

Four key wind energy organizations teamed up for a three-month wind energy measurement campaign to answer the question. The team from ENGIE North America, GE Renewable Energy, DNV and Vaisala launched the campaign to see how nacelle- mounted lidar would compare with other technologies — especially from an operational and cost perspective. "Power performance measurements are actually quite costly, both for projects in flat and complex terrain," said Hong Liu, ENGIE North America. "In order to optimize our PPT program, we try to maximize our benefits and reduce the costs."

The campaign took place at a 250 MW wind farm in Oklahoma owned by ENGIE North America, and included one nacelle-based lidar, one ground-based lidar and one IEC met mast. In addition to comparing technologies, the campaign would advance the team’s operational experience of nacelle-mounted lidar—first in flat terrain, later in complex terrain—and help define installation guidelines now available for future projects on GE 2 MW turbines.

The solution: Conduct an IEC standards- based campaign

The team chose the WindCube Nacelle lidar, notably because of its reputation for high accuracy, reliability, flexible measurement range and cost efficiency compared with met masts or ground-based lidar co-located with a small met mast. The WindCube Nacelle was installed on a 2.82 MW, 127m diameter, 89m hub height wind turbine, in its standard 4-beams configuration, positioned and mounted according to GE Renewable Energy recommendations. A permanent 89m IEC met mast and ground- based WindCube vertical lidar were located respectively at 282m (2.2D) and 290m (2.3D) from the turbine. The team tested four turbines during this 3-month campaign.

The results: A clear winner for PPT

The graphs below show the power curves measured with the met mast and WindCube Nacelle: The power curve is clearly less scattered with the lidar. Horizontal wind speed measurement comparison was also performed: The right graph shows the correlation between the two instruments.

Also, the standard deviation was smaller for the WindCube Nacelle. This highlights the advantage of the nacelle-mounted lidar by constantly measuring the wind in front of the wind turbine.

The group has gained high confidence in performing PPT using WindCube Nacelle and ensured a cost-effective and straightforward approach throughout installation, data collections and data analysis. "It was nice to get the experience in this campaign, where we could see lower scatter in the nacelle lidar-based power curve, lower standard deviation, and lower category A uncertainty from an IEC perspective," said Alex James, GE Renewable Energy.

"The tangible result is that we feel comfortable using [nacelle mounted lidar] to do PPT," added Hong Liu. "All three approaches show quite identical results and that made us feel very comfortable to use it moving forward. Another aspect is the PPT results variations upwind of the turbine: That is a very good aspect for us to understand."