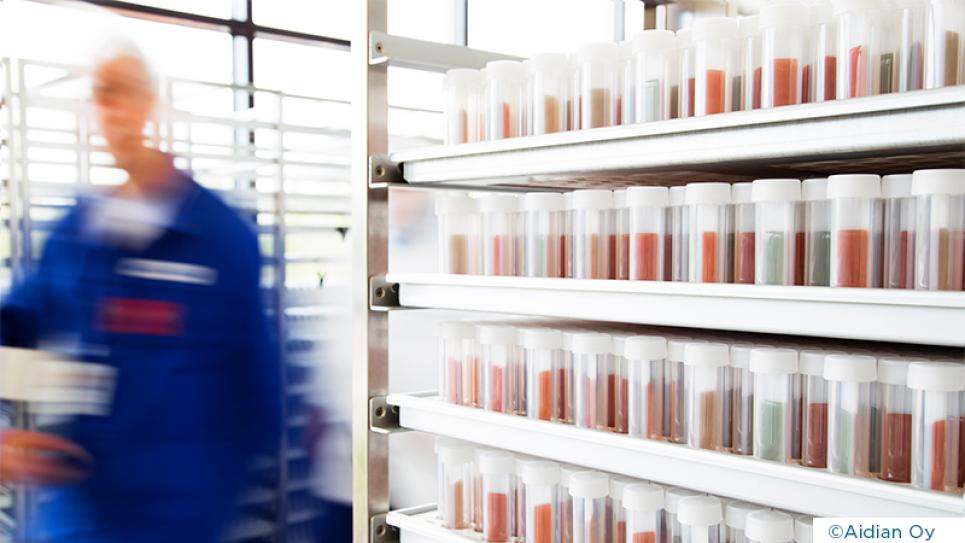 Raw materials and products used for diagnostics have very specific storage temperatures. Many different freezers and cold rooms are used in Aidian’s production facilities, and these are now monitored around the clock by the Vaisala viewLinc monitoring system.

Aidian Oy is an international diagnostics company with 50 years of experience in developing and manufacturing diagnostic tests for basic healthcare needs in hospitals and health centers. Its products include blood test kits, for example to rapidly measure of inflammation levels, microbiological rapid tests, and dip slides, as well as tests for monitoring the level of hygiene in various types of institutions.

Formerly Orion Diagnostica, Aidian was acquired by the Nordic private equity company Axcel Management A/S in May 2018, and during the following year the company was renamed Aidian Oy. Besides their head office in Espoo, Aidian has local offices in Sweden, Norway, Denmark, Germany, the Czech Republic, Slovakia, Hungary, Poland, and China

“When we broke away from Orion we had to replace the monitoring system because the license for the old system was owned by Orion. The system’s hardware was old and no spare parts were available, so an update was necessary in any case,” explains development engineer Patrik Hellström from Aidian. He works in a team responsible for investments, validations, and system updates, among other things. Hellström joined Aidian from Orion, so he had long experience with the previous monitoring system.

According to Hellström, the two top candidates for Aidian’s new monitoring system were the producer of Orion Diagnostica’s old system and Vaisala. The latter was selected based on its reputation as a manufacturer of reliable sensors. “The viewLinc system’s versatile temperature, humidity, and process measurements and the external indicators connected to these were the most determinant factors, and this was one of our main criteria,” he explains.

The deployment of the new system had a tight schedule as there was a deadline for stopping using the old system. Additionally, conditions had to be monitored with the two systems running in parallel for some time to ensure that everything was in order. The project was completed without problems: the monitoring system was up and running fast, and installation was easy.
“The installation of the wireless viewLinc system only required the placement of base stations, power cords, and power sockets, after which the wireless data loggers were placed in the facilities. Installation of the data loggers was also easy because for the DL1416 logger, for example, the sensors were pre-installed, so it was enough to have a power socket in the monitored space,” explains Hellström.

The raw materials and products used by Aidian, such as reagent packages, have specified storage temperatures. Aidian’s production facilities have numerous freezers and refrigeration rooms, and it is important to monitor their conditions around the clock. In this case, it is a good idea for the right people to be notified quickly of any possible deviations.

The server-based viewLinc software collects measurement results from data loggers and saves them in the system’s database. Logged-in users can see the collected data from a web browser-based interface. In case of deviations, the viewLinc system sends a notification and email alert to the person responsible and to the maintenance department. Measurement results can also be reviewed later if there is a need to ensure that conditions have been maintained within specified parameters during the reviewed period. The system can be set up with many different user roles and rights, and these can be individually customized.

“The wireless metrics have proven to be a good solution as they are easier to use than wired loggers. In the future, we could deploy more of these for the temperature measurements that we use
the most. This would simplify installation and troubleshooting,” states Hellström.

For Hellström, the biggest benefits of the Vaisala viewLinc system are its flexibility and ease of use. For example, if a refrigerator is moved to a new location the transfer of measurement and the new setup is effortless. Measurement configurations are intuitive with clear instructions. The system also enables cost savings: the costs of the old system were higher because connecting sensors was complex and labor intensive. Now Aidian only needs a network-connected data logger near the site to collect information for the viewLinc system. The system is also easily expandable by adding new data loggers.

Aidian’s new system includes Vaisala's DL4000 universal input data loggers for analog sensors, the PDT101 pressure transmitters, the DL1016 and DL1416 temperature loggers for freezers and fridges, and the VaiNet RFL100 long-range wireless data loggers for ambient conditions. Multiple wireless RFL100 data loggers can be connected to the viewLinc system with the VaiNet AP10 network access points. The viewLinc software collects data from all the sensors and monitors reliably in the background.

“The Vaisala viewLinc system has been easier to maintain when compared to the previous system. We replaced all manual measurements with this system and this has clearly reduced the workload related to collecting measurements and possible deviations. As the system is browser-based, it can be accessed from anywhere,” adds Hellström.