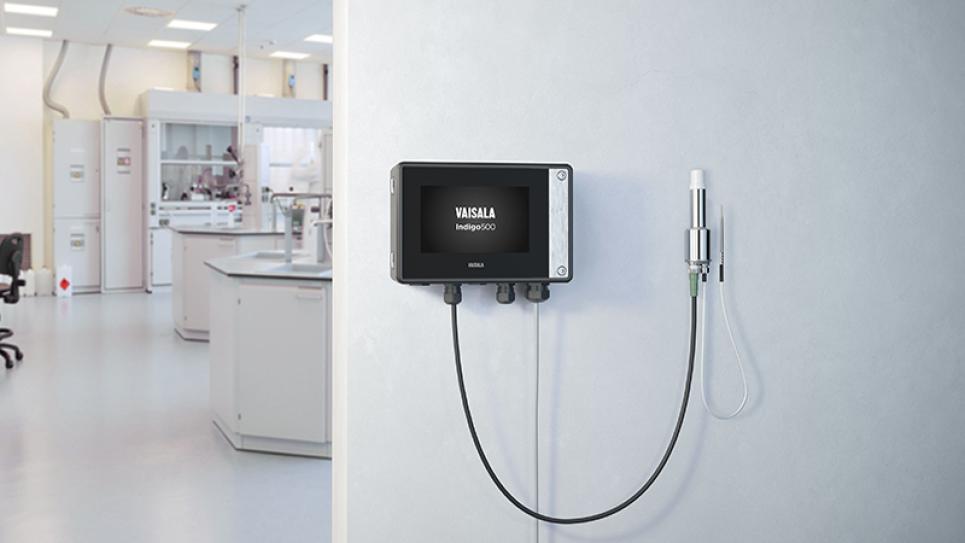 In this video, we show how to connect the HPP270 probe to the Indigo500 transmitter.

HI, I’m Joni Partanen. In this video, let's look how the HPP272 hydrogen peroxide probe can connect to the Indigo500 transmitter.

The additional features in the Indigo500 transmitter include more analog outputs. The Indigo520 has four analog outputs, while the probe has only two. We also have further power supply options with the Indigo500. Here, we have main power in this unit. You can also use the Modbus TCP protocol for cases where you prefer an Ethernet communication.

Here, I have a few example process connections that you can use in your application. Let's use these two connections and install the HPP270 probe.

Now, it's time to connect the instrument with the transmitter. It’s worth  that this Indigo520 supports two probes simultaneously. But in this setup, I will use only one probe. The probe is now connected, and it's time to start setting up the display.

Note that the first thing that the HPP270 probe does is the purge process. The purge is activated now, and we can see it from the active notifications. The first thing we want to set is some readings in the display.

Go to Home settings: with the HPP270 probe, we are interested in hydrogen peroxide concentration. Let's put that as the first parameter, the second can be relative saturation, and third can be temperature.

Now we can put something in the graph view as well. For example, hydrogen peroxide concentration and relative saturation. And graph scale, 15 minutes. Now we can see some readings but note that we see only the temperature. That’s because the purge process is now active.

The next thing we probably want to do is output this measurement data into a control or data acquisition system. Go to Menu and Outputs, and we will use analog outputs. For channel output number one, let's set hydrogen peroxide concentration with a minimum value of zero, and a maximum value of 2000 ppm for this application.

We also have the Error output. If something is wrong, say the probe is disconnected or something like that happens, the transmitter will output 3.6 milliamps. We will do the same for the second output and use relative saturation here as an output parameter. With 4 milliamps meaning 0% relative saturation and 20 milliamps meaning 100%. The error and low clipping limit can be the same. We want to know the temperature as well so that shall be our third output. Let’s say that temperature in our application from zero to 60 degrees C.

Now that the outputs are configured, and it's time to check that the control system is reading the same value as the transmitter outputs. We test that the analog outputs go to the system as expected. The Indigo500 transmitter has a test-mode functionality. We will test channel one first and we do that by activating the test mode, which forces the analog output to 4 milliamps.

Now, I will use a multimeter to demonstrate the analog output. So, let's switch it to milliamp mode and make sure that we are measuring DC amperes here. We open the lid and find the analog output terminals, number one, two and three. We are simulating the value of 4 milliamps in the first channel. So, if I put the probes here in plus and minus, I can read 4.01 milliamps. Looking good.

Let's also test the span value, which is 20 milliamps. And there it is, 20.01. Looking good as well. So, now, we repeat this measurement for all three channels. All three channels have been tested and it's time to close the lid and stop test mode. Note that this is important because we don't want to leave the device in the test mode when the actual process starts running.

Now we return to the home screen and here we can see the readings: vaporized hydrogen peroxide at 2 ppm at the moment, relative saturation is 10%RS, and the temperature is 23.2°C Here we can see in the graph display that the HPP272 probe is now connected to the transmitter and installed into the process. We tested that the analog outputs have been configured correctly, and the reading outputs as expected. So, we are ready for the measurement. Thanks for watching!

vH2O2 Calculator:
Learn how to simulate conditions in bio-decontamination processes

In this webinar, Vaisala Product Manager Joni Partanen guides you through hands-on training on using Vaisala’s vH2O2 calculator. Joni discusses differences between a theoretical model (like the calculator) and application data. Differences include: the effect of materials, vapor generators, HEPA-filters etc. Learn how important to take control of vH2O2 bio-decontamination processes with accurate measurements.