The Perseverance rover landed on Mars on February 18, 2021 and is exploring the red terrain as we speak, carrying also Vaisala’s humidity and pressure measurement technology. The mission has been an exciting journey for us at Vaisala, and we cannot wait to learn the data our technology continues to deliver and what new revelations we can deduct from it.

Prior to the rover launch in July 2020, I had the pleasure of talking to former NASA astronaut Mike Massimino, who also was a guest speaker in our webcast. Let’s see what he said about space, Mars, and what we can learn from exploring beyond our own planet.

Mike, you have been to space twice. What can you tell about the experience?
Space is a very magical place to be. It is obviously unlike any other place that we’ve been – that I have been – and it is beautiful and interesting.

The brightness of the sun, for example, is the brightest light I’ve ever experienced, and the darkness, when you’re orbiting the planet, is the darkest dark I’ve experienced. When you’re out orbiting at 17 500 miles (28 000 km) an hour, that means 90 minutes for one orbit of the planet: 45 minutes in sunlight, 45 minutes in darkness. A total of 16 sunrises and 16 sunsets in a 20-hour period. 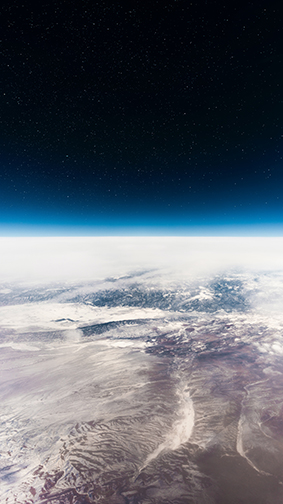 What was your biggest revelation when you were in space for the first time?
The beauty of our own planet is what struck me the most. I thought I was looking into an absolute paradise. And as  I was looking at this magnificent view in my spacesuit,  I realized that the spacesuit is the only way that I’m able to see this. At the same time,   I can see the beauty of the Earth and the vastness of space, and it’s unforgiving. You realize that we can’t live anywhere out there like we live on Earth: we’ve checked out the neighborhood and got no other place to go. It’s hard enough for a spacecraft to survive.

So you see this beautiful planet and realize that the beauty is not just beauty – it’s a fragile beauty. We need to take care of our planet.
That was the revelation that I had.

What do think is the motivation for us to keep exploring space?
I think the main reason is science and understanding our world. We go to space to learn about Earth, who we are, and how we can make life better on Earth. Also, it is important to learn how and why for example Mars went to one direction and Earth went to another in its development.

There’s nothing like finding out the answers to science questions that allow us to understand and take better care of our planet, and to take better care of each other. So that we can continue to thrive as humans on this beautiful planet that we have.

Although living elsewhere in space is out of reach at the moment, one reason we explore space, and Mars, is learning more about it for taking people there. We of course need to know more about the atmospheric phenomena for the safety of landing and living there. What else should be considered?
When going to space, people need protection from the radiation and extreme temperatures. They also need air to breathe, food, water, and comfort. This makes it much more difficult to put people out there.

When do you think we will see the first mission with human crew to Mars?
We’ve been waiting for that for a long time. I became an astronaut 24 years ago, and we thought someone in my astronaut class was going get a chance to go to Mars. The answer is always 10 to 15 years, but it’s been 10 to 15 years for about the past 40 years.

Going back to the Moon is a more likely goal to happen in the next 5 to 10 years. I think that’s what we’re working toward now, and we’ll learn a lot that we can use as a springboard to Mars. I think it’s still going to be a while, but it is within our grasp. Lots of nations are interested in doing this, so hopefully we can figure out a way to work together to make this happen.

What other learnings did you take from your time in space?
When in space, another thing that I thought was that we’re all in this together, and my concept of home changed. I can call myself a New Yorker and an American, but I’m also a citizen of the Earth. After being to space, that’s the way I see our planet: that we’re all in this together, whether it’s the pandemic, taking care of the environment, or trying to get along. We might think we’re in different places, but we’re all citizens of the planet Earth.

The Perseverance rover mission, that Vaisala is a part of now, is also international: it’s American, it’s European, it’s all the different countries that are participating. The entire world is going to learn from the data that Vaisala’s sensors provide and the rover explores on Mars. It’s about benefiting the whole planet. I think we’re going to learn so much from this, and it will be a great benefit to the world for many years.

Michael J. “Mike” Massimino was a NASA astronaut for a little over 18 years and currently acts as Professor in Columbia University. He visited space twice, last time 11 years ago, and was the first person to tweet from space. As an astronaut, Mike was a spacewalker at the Hubble Space Telescope, working with faults to repair and  upgrade the telescope.

Published with the permission of
Michael Massimino.