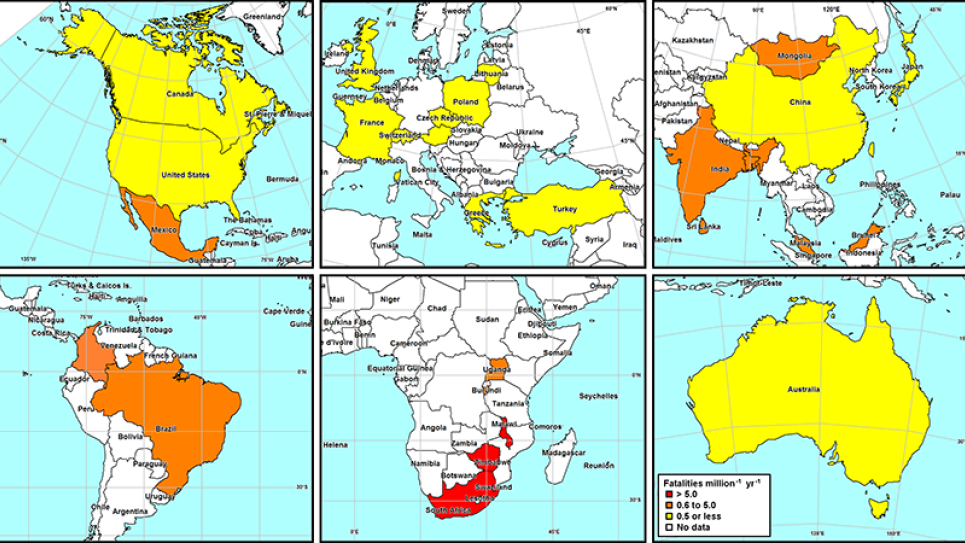 Huge amounts of lightning occur around the world, and over two billion lightning events have been detected each of the last five years! These events are being detected in real-time by Vaisala’s Global Lightning Dataset GLD360 network that has been operating for over a decade. So, we now have enough data to start looking at some specific areas where lightning is a concern for the safety of people.

A current estimate is that up to 24,000 people are killed by lightning per year globally. This number is based on published national summaries of lightning deaths in 26 countries with data ending in 1979 or later. Unfortunately, the total is certainly much larger. Nations in Africa and Southeast Asia are highly vulnerable due to living and working in lightning-unsafe homes and buildings, and going to unsafe schools. Other factors include a large participation in labor-intensive manual labor in rural settings, lack of lightning education, inadequate health care, and no availability of lightning data for warnings.

In Bangladesh, we were able to collaborate with those having access to lightning fatality data. GLD360 stroke density was combined with fatality data to find that deaths were most often 1) in agricultural situations, 2) during the pre-monsoon months of April and May, 3) in the northeast districts, and 4) during both morning and afternoon. Identifying the threat situation in this way can hopefully lead to a better understanding and potential reduction in the large lightning death toll in Bangladesh.

In Malawi, lightning fatality data are available for half of its districts. Matching GLD360 stroke density with fatality rates is not as clear as in Bangladesh, however, so more research is needed to separate the factors leading to fatalities.

In other Southeast Africa nations, GLD360 data often show that lightning is concentrated along the shores of Lake Victoria and other large lakes in the Rift Valley. During the year, lightning is tied to the migration of the Equatorial Trough, and that usually means a higher occurrence from November through March south of the equator. Lightning is most common during the afternoon, but areas near the large lakes also have nighttime lightning.

Be sure to follow Vaisala blogs for this week on uses of lightning data for human safety. Also, please visit the National Weather Service and National Lightning Safety Council websites this week and in the future.