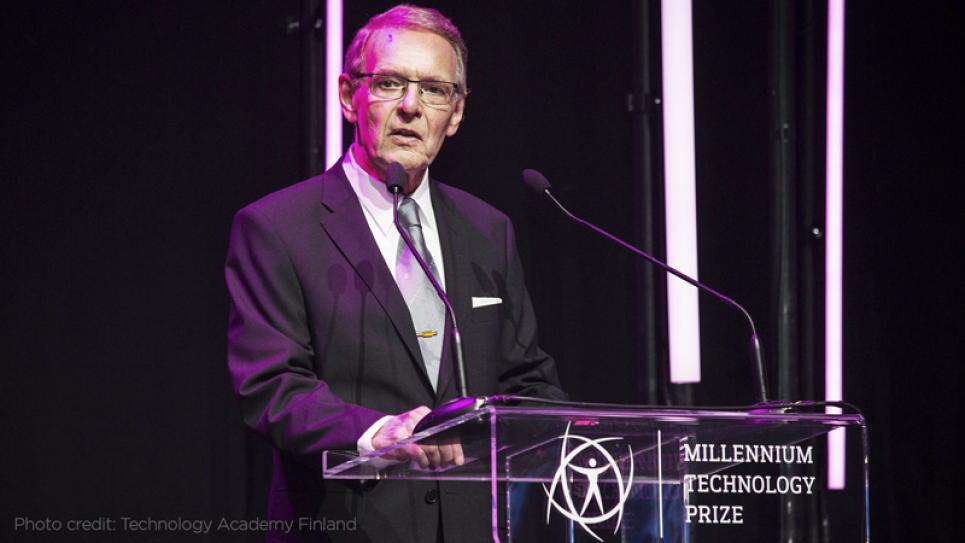 Doctor Tuomo Suntola, who this spring received the prestigious 2018 Millennium Technology Prize for his technology of atomic layer deposition (ALD), and who in 1973 invented our HUMICAP® sensor, visited Vaisala in June and gave an interview on his work and career.

Tuomo Suntola graduated M.Sc. (1967) and obtained his Ph.D. (1971) in Electron Physics in the Electrical Engineering Department at Helsinki University of Technology. He entered into materials sciences and thin film technologies by solving the late 60’s mystery of the nanosecond switching mechanism in “Ovonic” thin film devices as his doctoral dissertation. In 1973, his first industrial work was HUMICAP®, a thin film humidity sensor for Vaisala, which almost 40 years later still holds the position of the world market leader in humidity sensing.

The work was ordered in 1971 from Yrjö Toivola, Vaisala’s Managing Director at the time. The purpose was to investigate the technologies that were used to measure relative humidity in the atmosphere with the aim of incorporating the humidity sensor to Vaisala’s ground weather stations, and with the dream of also adding the sensor to a sonde. Toivola ordered the work from the Technical Research Center of Finland (VTT), where Suntola at the time was finishing his doctoral thesis.

Suntola remembers Toivola warmly: “Yrjö Toivola was the primus motor behind the project, he had an appetite for new technology and possessed great intuition.” Suntola stayed in touch with him even after he had finished working for Vaisala.

The biggest innovation was applying a polymer a thin film structure, which was completely new and revolutionized the whole humidity measurement industry and suited the sonde very well. From the production point of view, the technology was cutting-edge: the process is mass production friendly and the sensor is so linear that it enables us to have only two a few calibration points. Hence, we can deliver the products very efficiently even in high volumes, which creates a great competitive advantage for us.

The solution was first implemented in weather stations, then in radiosondes, and after that in industrial measurement. Currently, Vaisala produces the fifth generation of the HUMICAP. From the outside, it looks very similar but it is made on an aluminum sheet instead of glass due to the integration of temperature measurement.

Gaining In-depth Understanding of the Problem Is the Key

According to Suntola, in-depth understanding of the problem is the key.

He gives an example: “When inventing the ALD, I was founding a research department but no laboratory had yet been established. Of necessity, I had time to ponder. In the office, the periodic table of elements was hanging on the wall and I had time to stop and think about the core of the problem. And in that situation I found the solution,” Suntola explains.

Suntola's innovations have been focusing strongly on the industrial side. He has enjoyed solving problems that matter and benefit the users.

During his long career, in addition to his technical work, Suntola has had an interest in deep understanding of the basics of physics. He has, for example, written a book on the history of science called “The Short History of Science - or the long path to the union of metaphysics and empiricism”. He has studied the modelling of the physical reality and published another book called “The Dynamic Universe, Toward a unified picture of physical reality”. In the book, he introduces a holistic theory opening a new viewing angle to the theory of relativity.

Due to his interest in physics, the basis for his research has been the in-depth understanding of the phenomenon.

The central task of science is to make nature understandable. “My passion lies here, and the research continues”, Suntola concludes.