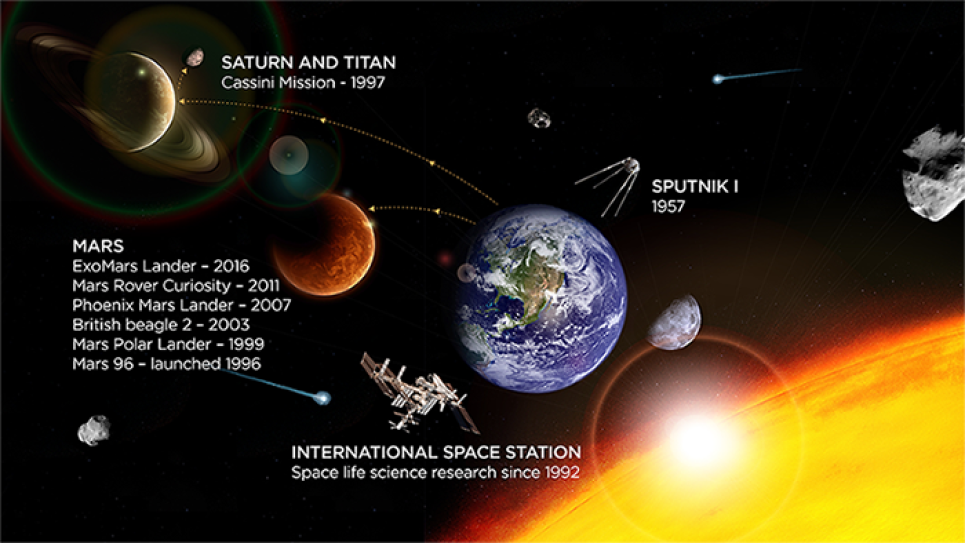 When you think of Vaisala, space exploration might not be the first thing on your mind. However, Vaisala has been involved in space missions since the 1950s.

Thanks to their high quality, Vaisala sensors have been used in many space missions for decades, helping scientists gain insight into the atmosphere to better understand outer space. Our technology is extremely stable and this is vital for the extreme environmental conditions that are experienced in space. Vaisala sensors are able to withstand extreme heat and cold and are highly tolerant of shaking and vibration.

It is this high level of stability that ensures the sensors can deliver accurate readings of the real changes taking place in the environment on other planets.

From Saturn to Mars

Vaisala sensors have been used in Mars missions since 1996. The last time Vaisala technology reached the Martian atmosphere was as recent as this year when the FMI built instrumentation based on Vaisala sensors for the European Space Agency's ExoMars 2016 mission. Mars is not the only planet visited by Vaisala technology. Our pressure sensors were part of NASA's Cassini mission which was launched in 1997, set to land on Titan, the largest moon of Saturn. This is one of the most ambitious missions ever launched into space and is still ongoing.

Scientists at BioServe Space Technologies at the University of Colorado have also been using Vaisala's carbon dioxide, humidity, and temperature sensors to control life science experiments both onboard space shuttle flights and at the International Space Station since 1992. We are proud to have supported space exploration efforts for decades and will continue lending our expertise and providing sensor technology that helps unlock the secrets of the universe around us in the future as well. The picture above depicts all missions Vaisala has been involved in. Curious to know even more about Vaisala's history in space? Check out the article To Mars and Beyond: A History of Vaisala in Space, published in Vaisala News issue 198.

Elina Nylund started working at Vaisala as a Giant Leap Intern 2016. After the internship, she wrote her Master’s Thesis for Vaisala about integrated reporting.