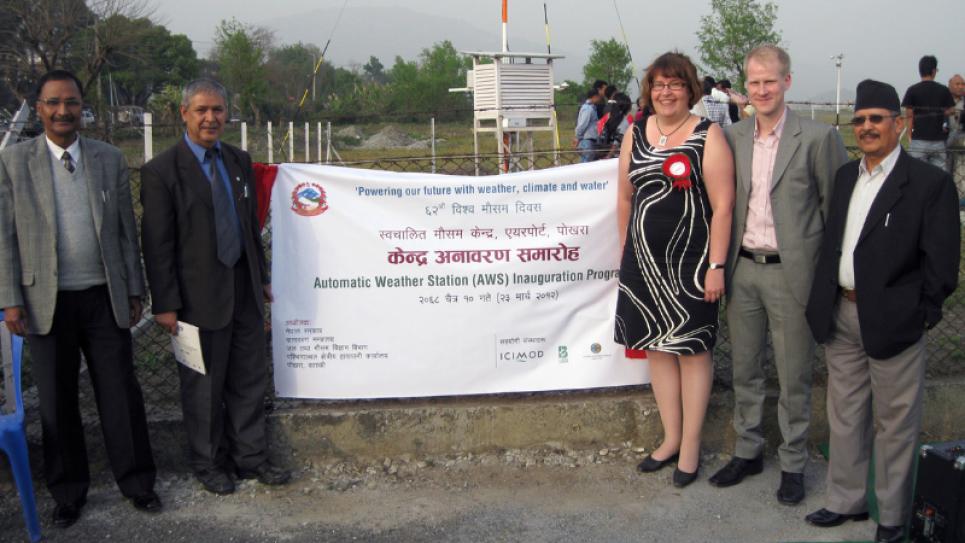 In 2010, the Finnish Meteorological Institute (FMI) launched a cooperation project (FNEP), financed by the Finnish Ministry of Foreign Affairs, with the Department of Hydrology and Meteorology (DHM) of Nepal.

The aim of this project has been to improve Nepalese meteorological expertise and operational preparedness for natural disasters. Nepal is extremely vulnerable to the effects of climate change with natural disasters increasing steadily. Every year natural disasters claim an average of 950 lives and cause approximately EUR 11.4 million in material damage.

A country of 27 million people, Nepal faces serious climate risks. Based on the Climate Change Vulnerability Index, it is the 4th most climate vulnerable country in the world, with poverty and adaptive capacity being some of the key determining factors. Weather conditions in Nepal are challenging; drought and flooding caused by torrential rains may occur simultaneously in different parts of the country. Annually, about 30 people are killed by thunderstorms alone. However, the greatest damage is caused by floods and landslides. Floods also have other health effects since they make it difficult to secure a supply of clean water. Epidemics caused by the lack of clean water annually result in an average of 400 deaths. Well-developed weather and climate services would allow for more effective management of adverse impacts on the Nepalese economy and population brought about by extreme weather phenomena.

Irma Ylikangas, Business Development Manager at Vaisala, had an opportunity for job rotation at the Finnish Meteorological Institute (FMI) in 2010–2013. She had a position in FMI's Expert Services unit, which is responsible for international cooperation projects and targets developing countries. Irma worked closely with the Department of Hydrology and Meteorology (DHM) of Nepal and had a chance to visit the country 13 times during her three years at FMI. "Job rotation between FMI and Vaisala is a unique opportunity for meaningful knowledge exchange between two expert organizations", praises Harri Pietarila, Head of Expert Services at FMI.

During the project, FMI experts, Irma included, made future development plans for the meteorological network of Nepal, a socio-economic study, climatological services and developed an early warning strategy. An automated weather station was installed in Pokhara as part of the project. As a sign of goodwill, Vaisala provided its GLD360 Lightning Dataset for a trial period during the project. During the trial period FMI trained DHM personnel in the principles of lightning location data, as well as actual hands-on training for the operational DHM forecasters. This was the first time DHM had been able to utilize lightning data.

"The meteorological network of Nepal needs to be updated," Irma says assertively. The World Bank pilot project 'Building Resilience to Climate Related Hazards' will provide the needed budget of some USD 17 million to refurbish the entire meteorological infrastructure. According to the FMI experts, the necessary meteorological instrumentation include weather radar, several Automatic Weather Stations, sounding stations, and a lightning detection network. The hydrological network will also be updated. "In FMI's Socio Economic Study it was estimated that every dollar invested in the development of DHM will result in a 7-to-11-fold return for Nepalese society," Irma points out. The second phase of the project, FNEP2, will proceed in 2014.