As a young researcher at the Finnish Meteorological Institute, I found myself sitting in a meeting room at Vaisala in fall 1988. With me in the room were a large product development team from Vaisala, some groups from the Finnish Meteorological Institute, and delegations from France and from NASA. The meeting was about studying Mars using small research stations that would descend to the planet's surface. Vaisala's measurement probes would be used in the research equipment.

Vaisala became involved in the Mars study when the Finnish Meteorological Institute launched a feasibility study for METEGG landers as part of the international Mars 92 program. The feasibility study began at the start of 1988. As part of the study, Vaisala was responsible for the specification and design of the main computer aboard the METEGG lander as well as the instruments used to measure the planetary atmosphere. The negotiation with the NASA delegation was a part of this research work.

I had only just begun my career in research at the Finnish Meteorological Institute a couple of months earlier, and I looked around the room in awe. Luckily, the dignified senior scientists and Vaisala's top managers turned out to be nice people. I was sat next to a NASA employee named James Pollack, and we had some interesting discussions. He was interested in the work of the Finnish Meteorological Institute and in Finland generally. I later found out that Mr. Pollack was one of the principal authors of a publication that modeled the nuclear winter caused by the local use of nuclear weapons – a phenomenon that could lead to global catastrophe. This led to a change in the nuclear doctrine of superpowers. The research work was based on Mr. Pollack's simulations of the planetary atmosphere of Mars. Back then, the Mars study had enormous positive side-effects in a geopolitical sense.

The meeting went on, and the NASA delegation was very positive about Vaisala's productions and the state of collaboration with the Finnish team. Some technical analysis had already been conducted, but this meeting was a formal confirmation of the start of a period of close collaboration. For Vaisala, it was the beginning of a long period of international cooperation on research into planetary atmospheres.

Mars makes for interesting studying because it is Earth's sister planet and the easiest planet to approach using probes. As such, it is feasible to send research probes into Mars' orbit. However, reaching the surface of Mars is considerably more difficult, and the large number of failed landing attempts is testament to this: only about half of all the attempted landings have succeeded.

At the equator, the surface temperature of Mars varies from +20°C in the afternoon to -80°C at night. At latitudes close to the poles, the winter temperature can be -130°C. The atmospheric pressure is about one-hundredth of the pressure on Earth. The atmosphere is very dry, but there is water on the surface of Mars as well as enormous glaciers at the poles. Mars and Earth take a similar amount of time to revolve around their axes, and they have similar axial tilts, so the atmospheric dynamics on Mars are similar to those on Earth. This means that Vaisala's probes are perfect for studying also Mars.

At the beginning of the 1990s, Vaisala decided to focus on providing probes for Mars landers. The work was divided up, and Vaisala manufactured the probes and trained the Finnish Meteorological Institute on how to use them, while the Finnish Meteorological Institute was responsible for certifying batches of probes for space expeditions and designing and building measurement devices suitable for use in space. We have worked closely together throughout every work phase. This gave rise to a cooperation model, which has formed the basis for the designing of a large number of research devices that have been flown into space and operated there.

Takeoff of the Mars-92 program was pushed back to 1996, and the program was renamed Mars-96. At this stage, the project involved numerous Finnish industrial companies funded by Tekes. As a supplier of probes, Vaisala played a crucial role with regard to the results of the research program.

Mars-96 blasted off in November 1996 as scheduled, but the takeoff was a failure. The rocket orbited the Earth seven times before plummeting back into the atmosphere. Fragments of the rocket fell onto the Andes and into the Pacific Ocean. This was a huge disappointment, but we got over it. From then on, we decided we would seek to supply instruments to several space programs in order to diversify the risk.

The Mars Science Laboratory MSLCuriosity rover, which landed on Mars in 2012, was an enormous success. The Finnish Meteorological Institute's instruments and Vaisala's pressure and humidity probes onboard have been working successfully already for more than eight years.

We have been able to deliver the longest-lasting time-series measurements of the pressure and humidity in the planetary atmosphere on Mars with the help of the instruments onboard the MSL rover, and more data is being collected. The pressure observation series paints a fascinating picture of seasonal, cyclical events on the planet, as 30 percent of the atmosphere condenses at the poles and is released back into the atmosphere. Local observations have helped us to understand the processes of interaction between the atmosphere and the planetary surface, the daily flow cycles, and other microclimatic phenomena near the observation point.

Perseverance is the next step in our successful collaboration

Vaisala and the Finnish Meteorological Institute will continue working together to study Mars. In February 2021, NASA's Perseverance rover will land on Mars carrying similar pressure and humidity instruments as the MSL Curiosity. The same type of instruments will also be onboard the ExoMars rover, which will be launched by the ESA in 2022.

The outcome of our collaboration is a set of products whose quality improves with each iteration. At the same time, consecutive programs produce highly comparable data.

The meeting described at the start of this text ended on a positive note – the quality of Vaisala's products and the motivation of the research personnel won the foreign delegations over. Countless meetings have been held over the 30 years since that day. We have new successes to look forward to next February, when NASA's Mars2020 Perseverance rover lands on Mars. This mission is once more carrying precision instruments created in collaboration between the Finnish Meteorological Institute and Vaisala. 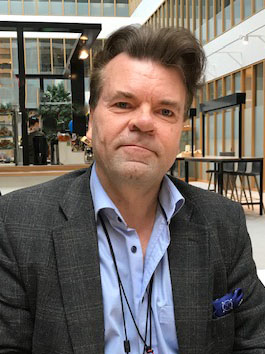