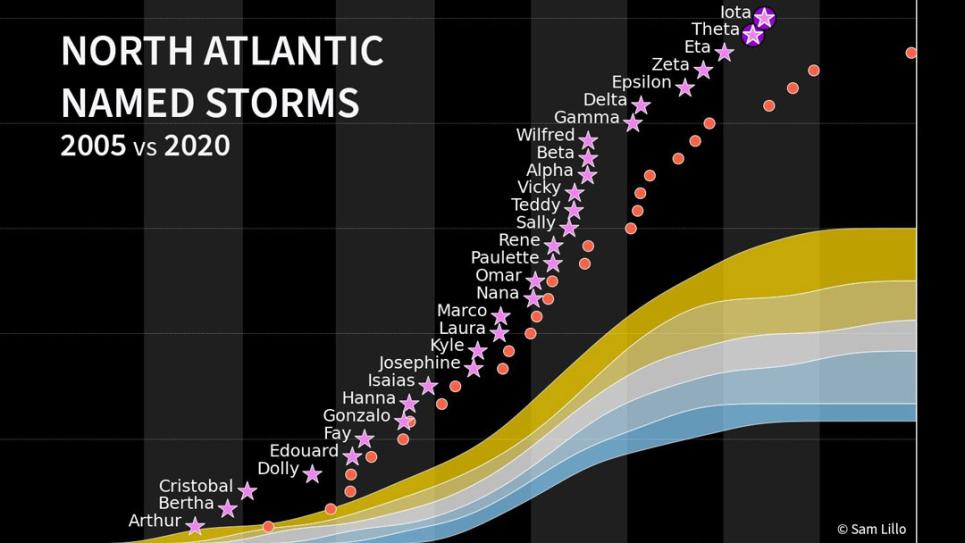 The 2020 Atlantic Hurricane Season got off to an early start this year, when Tropical Storm Arthur was named on May 16. The season hasn’t slowed down since then, and we are at a record number of tropical cyclones for a single season (31) – with potentially more to come! 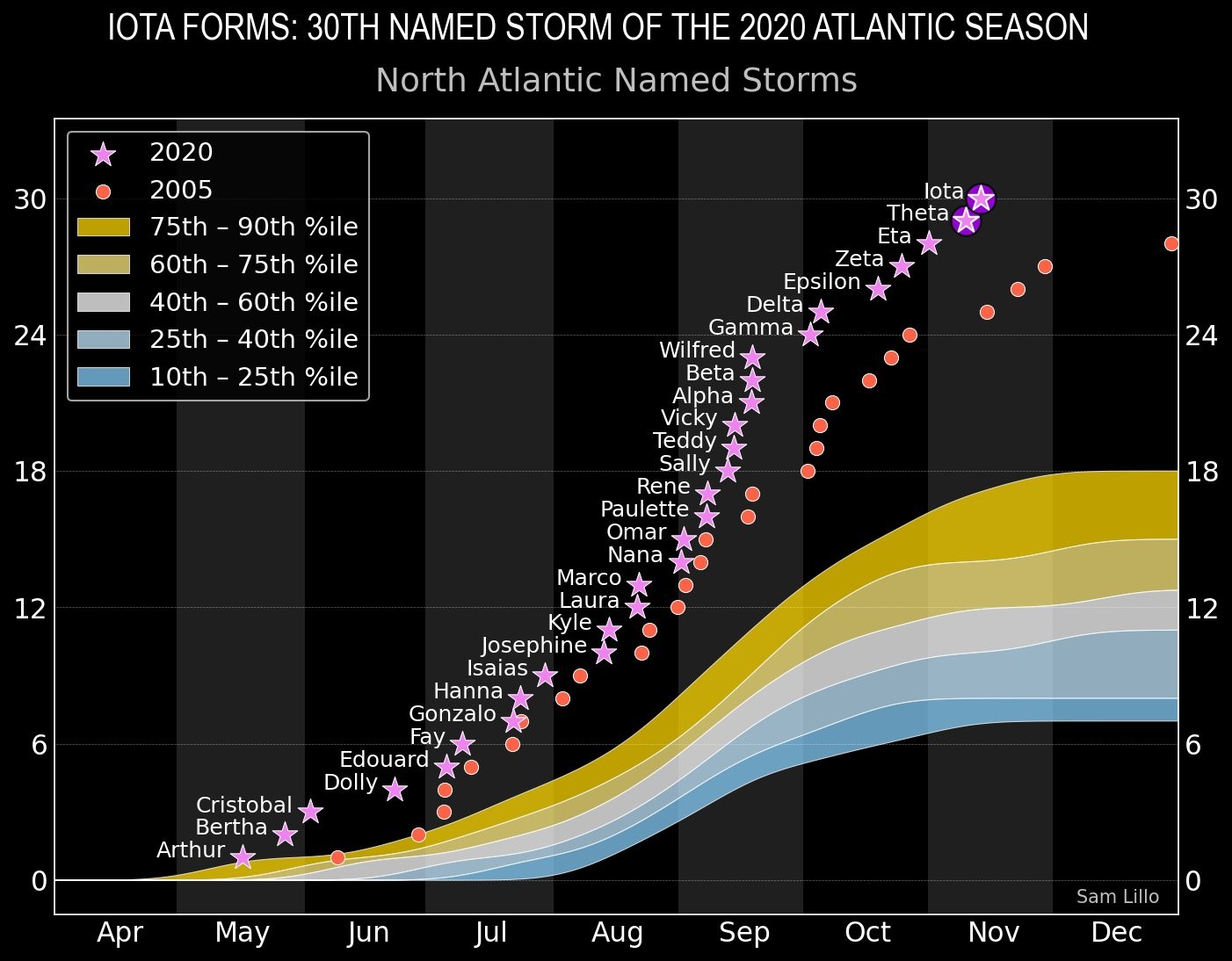 Chart showing when each 2020 Atlantic tropical cyclone developed, compared to the old record season (2005) and the statistical ranges for storms in a season. Data complete through 19 November 2020. Chart created by Sam Lillo.

The United States Air Force Reserve Hurricane Hunters and the NOAA Hurricane Hunters have combined for hundreds of reconnaissance flights into these storms. During these reconnaissance flights, the Hurricane Hunters release dropsondes into the storm. Dropsondes measure the tropical cyclone’s wind speed and direction, air pressure, relative humidity, and air temperature. These data are relayed back to the aircraft and then on to operational meteorologists who analyze the data to better understand the storm. The data are critical for weather forecast models – without the data, the forecasts are 10-15% less accurate, potentially projecting a trajectory hundreds of miles away from its actual path.

Radiosondes are the cousins of the dropsonde and are attached to the bottom of weather balloons to measure the same parameters. The 28 October evening weather balloon launch from New Orleans, Louisiana, was a special one. The RS92-NGP released by the National Weather Service took a trip through the eye of Hurricane Zeta. Radiosonde measurements in the eye of landfalling hurricanes are very rare, so it is interesting to see the sounding (below). 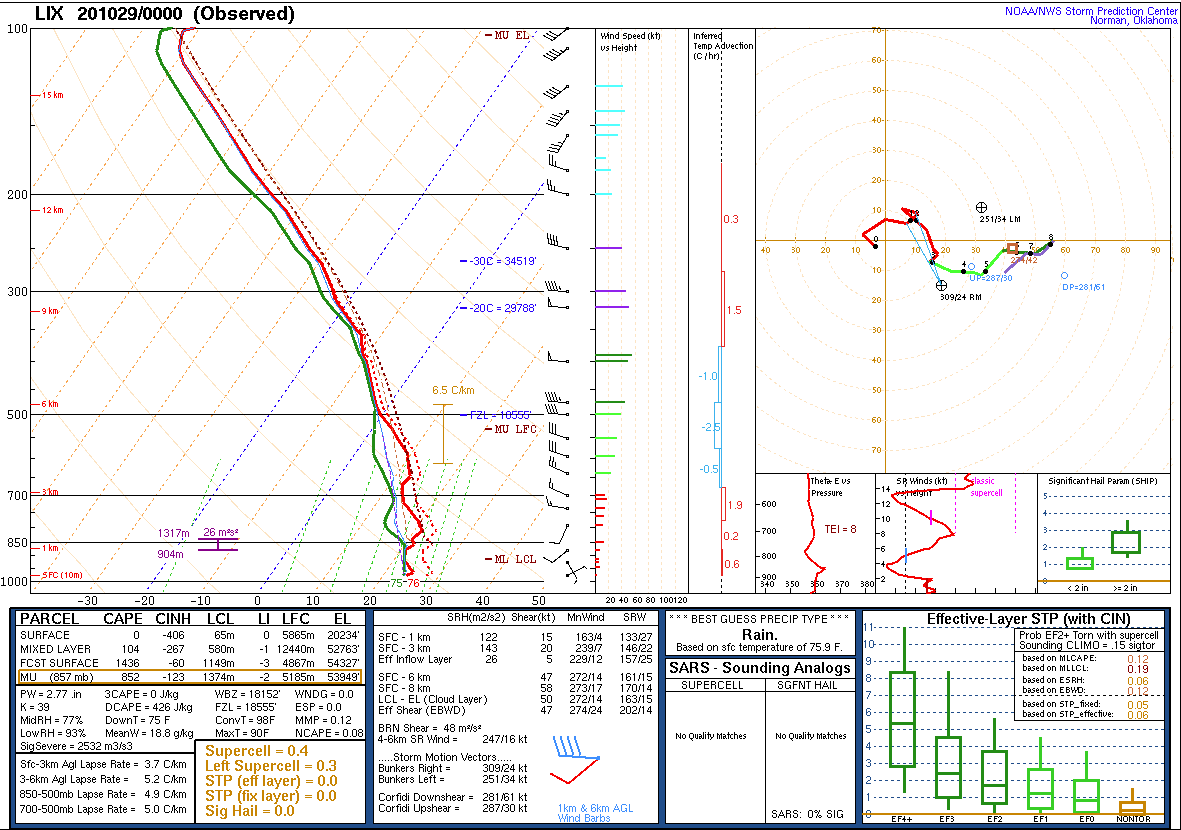 28 October, 2020 evening sounding from New Orleans, Louisiana, in the eye of Hurricane Zeta.

In this sounding we see that the red (air temperature) and green (dewpoint/humidity) lines are close together. This is to be expected in a hurricane measurement, because of the tropical air mass and very high humidity. Hurricane eyes are tranquil when compared to the rest of the system, with warm air sinking in the center of the storm, so the winds are relatively light throughout the profile. Between the 850 and 500 lines, the red and green lines separate some. This is where we see evidence of the sinking warm air. These are known as subsidence inversions and occur when the sinking air warms and dries the atmosphere even further. This phenomenon helps to clear the clouds around the center of the hurricane, making the clear eye visible.

Upper-air measurements, whether flown on a weather balloon, or dropped from an aircraft into a tropical cyclone are critical for making life-saving forecasts. Accuracy matters in these measurements, so Vaisala works daily to maintain the performance of all of its sensors.