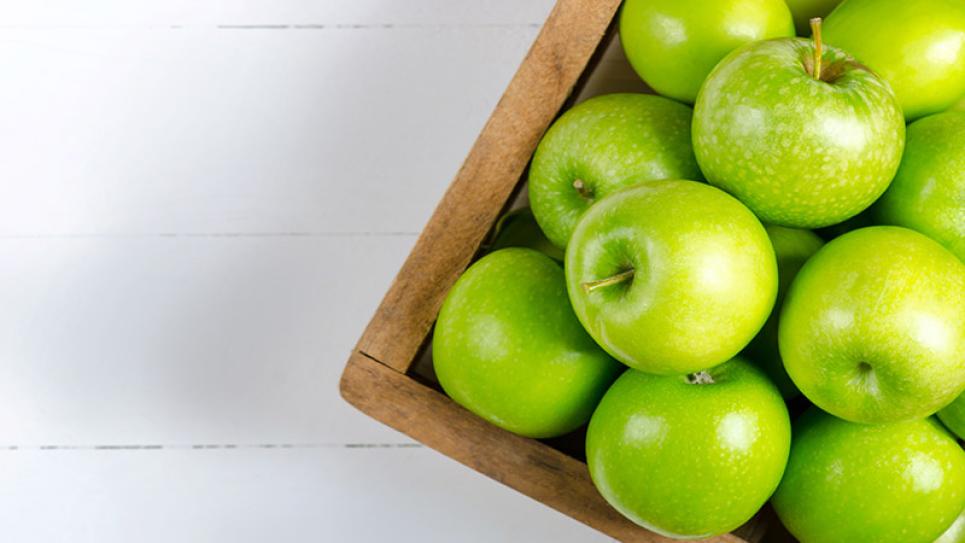 Controlled  atmosphere  (CA)  storage  is a  widely  used  technique  for  long-term storage of freshly picked fruits and vegetables. Historically, CA storage has been the  primary  method  for  the  long-term storage  of  apples.  Through  a  biological process  called  respiration,  apples  take in  oxygen  and  generate  carbon  dioxide, water, and heat. Controlled Atmosphere storage is an entirely natural process that reduces the effects  of  respiration  to  a  minimum  by controlling  the  environmental  conditions  surrounding  the  stored  fruit.  CA storage  makes  it  possible  to  buy  crisp, juicy apples year round. Many cultivars of apples can be preserved for a remarkable 9   –   12 months in CA storage, as opposed to only 2 –   3 months if using refrigerated storage.

In order to effectively preserve apples the storage atmosphere must have a controlled amount of humidity, oxygen (O2),  carbon  dioxide  (CO2)  and  temperature.  The  essence of CA storage is the range for O 2 and CO2 concentrations, which both must be kept between 0.5 to 2.5%.  The  precise  optimum  concentrations vary for different varieties of apples (i.e.  Golden  Delicious  apples  may  need different conditions than Jonagold apples, etc). The  relative  humidity  is  kept  in  the range  between  90  to  95%.  High  relative humidity  slows  down  water  loss  and enhances storage life of the produce, but humidity too close to saturation encourages  bacterial  growth.  Temperature  in the  storage  container  is  maintained around 1°C, the lowest possible temperature before damage to tissue occurs. 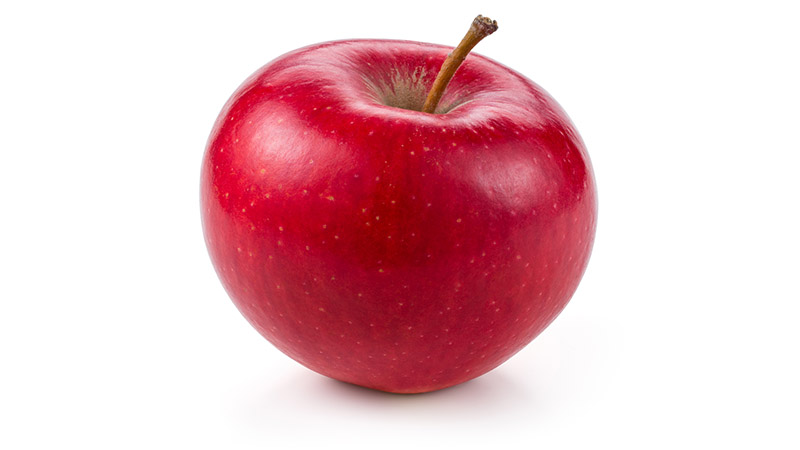 The typical process for CA storage begins by filling a storage chamber with apples. Some  chambers  are  large  enough  to contain  up  to  400  tons  of  apples.  The refrigeration  apparatus  is  then  activated to achieve the target temperature of  1°C.  During  cooling,  the  windows  or other chamber openings are left open to prevent  a  possible  collapse  due  to  pressure changes.  When  the  desired  storage  temperature is reached ,  the room is sealed airtight CA door. Once sealed, a nitrogen generator  is  started  to  purge  the  O2 concentration in the chamber from 21% ( found  in  normal  air)  to  approximately 3%.  Once  this  level  is  reached  the  fruit will  continue  to  reduce  the  O2  concentration  through  the  respiration  process. If the O2 concentration were to ever fall to zero th e apples would suffer unwanted and  irreversible  fermentation  reactions in  the  fruit.  If  O2  levels  drop  below  the safe concentration, outside air is added to the chamber to raise O2 concentration to the intended level.

In  addition  to  generating  CO2,  the apples also generate ethylene gas which accelerates  ripening.  Increased  levels of  CO2 will halt the ethylene production  and  therefore  slow  the  ripening process of apples dramatically. However, if  the  CO2  concentration  is  too  high  it may  terminate  the  life  of  the  apple  by destroying appearance, flavor, and nutritional value. In order to maintain the CO2 at the desired level, the excess CO2 must be removed from the air in the chamber. Gas analyzers are used to monitor and control  the  addition  and  removal  of  O2 and  the  reduction  of  CO2  through  the course of the storage period. Because of their responsibility to control the desired gas  concentrations  in  the  chambers, these analyzers are critical to the operation of the entire system. 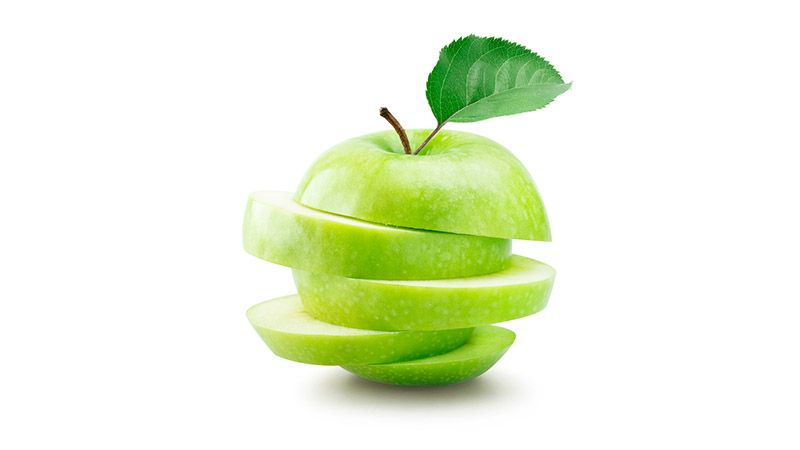 From bags of lime to more sophisticated methods

Years ago, chamber operators used hydrated lime to control the CO2 in the fruit  store.  Bags  of  lime  were loaded  on pallets  and  placed  into the store which absorbed all the CO2 that was emitted from the apples, eventually  leaving  the store with no CO2. Lime (calcium oxide, CaO)  absorbs  CO2  and  in  turn  reacts to  form  calcium  carbonate  (limestone, CaCO3). Once all the lime was converted to calcium carbonate, the operator was forced to manually vent or flush the room with nitrogen to control the CO2 level. Nitrogen  generators  require  large,high-power air compressors that can be costly  to  run  with  continuous  usage.  A carbon  dioxide  scrubber  is  a more  efficient and affordable tool for removing and  controlling  CO2  inside  a  fruit  store. CO2 scrubbers not only remove CO2, but  also  remove  some  volatile  organic carbons  (VOCs)  and  ethylene,  allowing optimal storage of fruit.

Storage Control Systems, Inc. is a company that specializes in gas analyzers, nitrogen generators and CO2 scrubbers for  CA  storage  systems.  Having been in the business for over 25 years, they are one of the longest established CA companies in the world. SCS  supplies  a  unique  CO2  scrubber called the Series II Smart Scrubber. This scrubber consists of two cylindrical beds containing  activated  carbon.  Activated carbon  is  a  porous  adsorbent  material, meaning  that  the  carbon  dioxide  molecules are attracted to and adhere to the s u r f a c e  o f  t h e  c a r b o n  m e d i a .  The activated carbon gradually becomes saturated, so it is necessary to periodically purge the beds  with  fresh  air  to  remove  the  CO2. The  unit  is  programmed  to  adsorb  on one bed, while purging with fresh air on the other to allow for continuous scrubbing.  The  Series  II  Smart  Scrubber is also  programmed  with  a  “DeOx” cycle to minimize oxygen feedback to the CA room. The Series II Scrubber uses a programmable logic controller (PLC) with a color touchscreen interface to  carry  out  its control  and  sequencing  functions.  The PLC  operator  interface  allows  simple programming  of  CO2  concentrations, resulting  in  highly  effective  fresh  fruit storage regimes.

The  Vaisala  CARBOCAP® Carbon Dioxide  Module  GMM221 is used to monitor the CO2 output from the beds, which controls  the  switching of the process from scrubbing to regenerating or vice versa at the most efficient point. Also, a snapshot of the CO2 coming from the room is taken at the beginning of the cycle  using  the  GMM221.  This  information  is  logged  into  the  PLC,  which  uses the readings to set the optimal scrub and regeneration set points. The  Vaisala  carbon  dioxide  sensor is  highly stable, very reliable, does not require routine calibration and is able to read gas concentration level s over several months to an accuracy of <0.5%. This is critically  important  for  successful  long-term fruit storage and requires minimal maintenance by the operator. 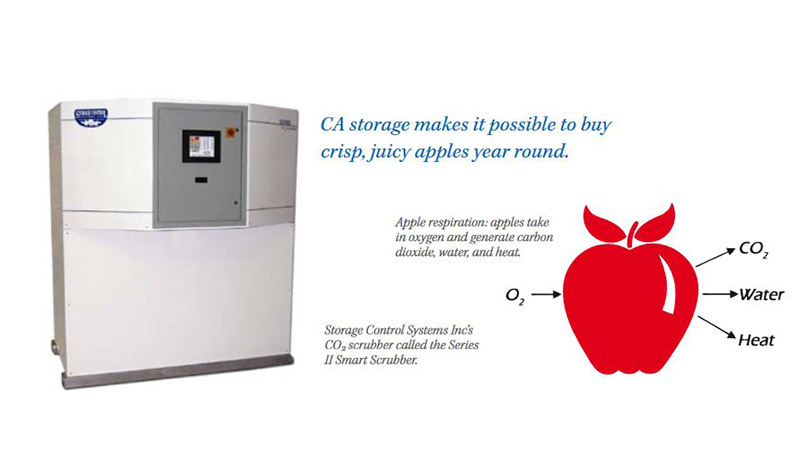