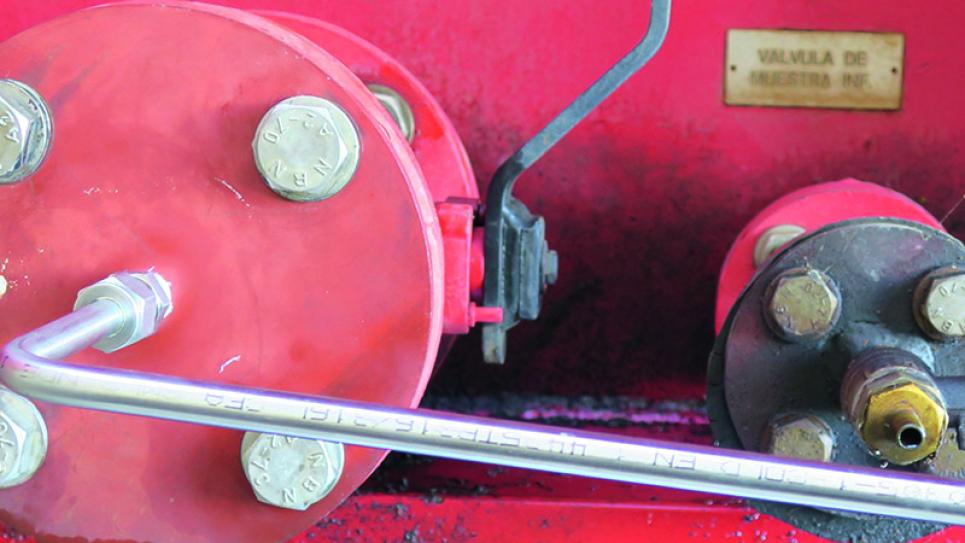 The Vaisala OPT100 was installed at CTM Salto Grande on the Argentina – Uruguay border, to evaluate gassing problems on a 50/50/100 MVA transformer, so that it could be studied over varying operating conditions over 1 year to determine if there was a correlation between gas levels and operating conditions, such as loading and top oil temperature.

Background to the problem
CTM Salto Grande installed an OFAF 100 MVA sealed single-phase GSU transformer in 2002 and since commissioning has had issues with suspected overheating. Ethane, and to a lesser degree methane, had appeared and was increasing. Thermal issues are a specific concern for this transformer as its oil contains DBDS, which at high temperatures can lead to the formation of corrosive sulfur. Hardly any hydrogen was found, except for spikes after the addition of Irgamet39 metal passivator to oil, which were assumed to be caused by stray gassing due to the Irgamet39. Nitrogen, but not oxygen, was also present at the same level as in the ambient air.

Project overview
In June 2017, the Vaisala OPT100 multi-gas DGA was installed to measure the key fault gases in real time. The monitor was connected to the transformer while live as the operating conditions of the hydropower plant didn’t allow for stoppages. Due to the unique design of the OPT100 this wasn’t an issue and installation was completed in half a day. Information was gathered from the OPT100 using its integrated browser based software and a cellular modem.

For one year the Transformer Maintenance Team analyzed the DGA data and compared it to the transformer operating conditions to see if there was any correlation between the two . Every two to three weeks during this process CTM Salto Grande took oil samples to analyze in their lab for comparison.

The transformer was degassed in October 2017. During this process, the OPT100 continued to measure. At the same time, lab samples were taken every two hours. A comparison of the two sets of results can be seen in Figure 3 (pdf).

Findings: load vs. gases
Figure 4 shows the transformer loading and CO2 concentrations in oil, measured by the OPT100 online monitor and the laboratory references, demonstrating a clear increase in CO2 during high loading periods. When the load was lower or varying, the CO2 remained stable or even decreased. This could indicate that during longer periods of high loading, there is a hotter area inside the transformer causing CO2 formation from either paper or oil.

The decrease in CO2 during lower load and temperature could be due to the exchange of CO2 between paper and oil as the temperature varies. This is not clear just from the load data, but becomes clearer when we include the estimated hot spot: THot Spot ≈ TTop Oil + H * gR * ipu^2, where gR is the average temperature difference between winding and oil measured at the factory during FAT and H = 2 is the estimated hot spot factor.

Several math models were tried using the estimated hot spot temperature: a linear one and another with a threshold for the hot spot to act on the CO2 concentration, estimated at around +70°C. More work is needed to refine the models. However, it is not a simple correlation, since it is possible that there is a large CO2 exchange over time that is not visible in data covering just a few days.

Yet another possible reason for the decreasing CO2 could be that gas is escaping from the tank due to the high partial pressure gradient between the ambient air and the oil, although this is a sealed transformer. However, the fact that the nitrogen levels increase relatively quickly after degassing indicates that the transformer is not completely gas tight.

The other fault gases, except probably C2H6, did not show any clear correlation with loading during the trial period. The increase in gas levels right after degassing is most likely due to gases that were in parts of the oil that were not available for degassing, like oil impregnated in paper and oil stuck in tight spaces. When this oil diffused back into the treated oil, gas levels increased.

Comparing the OPT100 to lab testing
In addition to the response time, the monitor readings were compared to the laboratory DGA results over the whole period. For simplicity, only methane is shown in Figure 8. The blue line is the measurement data from the monitor and the grey area is the monitor’s accuracy specification. The lab references are shown as blue dots.

When evaluating an online monitor by comparing it to lab references, the quality of the samples and the uncertainty of laboratory procedures must be taken into account. Furthermore, it is important to remember that every analysis method whether lab or online monitor has its own uncertainties. These should be considered when comparing results and making conclusions on monitor performance.

In this case, since the uncertainty of the laboratory was not known, +/- 15% was used, based on the average lab accuracy examples published in IEC 60567 [3]. Therefore, in order to compare a lab to an online DGA, it is more relevant to compare the trends than actual measurements. If the trends are similar and the areas with uncertainties are overlapping, you can conclude that the two different methods are in broad agreement.

Overall, CTM Salto Grande was very satisfied with the correlation of the readings and are adding additional online DGA monitors to their fleet to monitor transformer operations. The sampling and lab testing will continue for certain aspects, such as furans and dielectric strength, but the Substation Maintenance Manager agrees that the “addition of online DGA and moisture has provided us with a key tool for implementing a predictive maintenance program at CTM Salto Grande.”

However, water desorption is a faster process than absorption, and thus there is clear hysteresis visible when moisture as ppm is plotted against top oil temperature. This means a transformer with a varying load is never in equilibrium.

This phenomenon makes it challenging to define the right time to take an oil sample for water analysis in a lab. At the same temperature, the water content in oil may vary significantly due to the effect of hysteresis, whether the transformer temperature was increasing or decreasing at the time of sampling.

This is a very important factor to consider when taking an oil sample to determine the moisture in the solid insulation from a transformer with varying load and fluctuating temperature. This is also a key reason Online Moisture measurement is so much more effective in determining long-term moisture trends in the oil/paper. But it also indicates that when sampling oil, in order to be able to make any conclusions on moisture in a transformer, it is crucial to always record the oil temperature as well.

Conclusions
The results of the study showed a clear correlation between transformer loading and CO2. It is not yet clear to the authors whether the decrease in CO2 during the lower loading period is due to CO2 exchange between oil and paper or CO2 leaking out from the transformer. Further analysis is required to better identify the location of the hot spots. Thanks to the OPT100, CTM Salto Grande was able to better identify the cause of the problem in the transformer and what types of corrective action need to be carried out to resolve it. Additional testing has already been initiated and with the OPT100 installed online, gases – and the risk of the hot spot developing into a more serious fault – are now being monitored and better controlled.

Footnote
Asked for feedback on the OPT100, Eduardo Briosso, Asset Maintenance Manager at CTM, wrote that “over two years after installation we have had no problems with the equipment at all – no user intervention and no consumables have ever been needed.”

Download the case as a pdf below to see Figures 1-10.