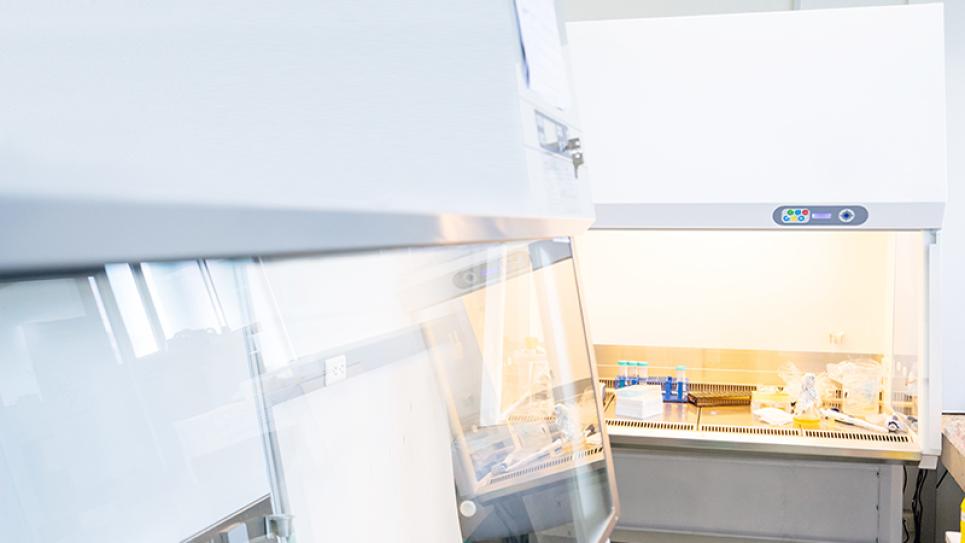 Vaporized H2O2 is becoming a favored bio-decontaminant due to its low toxicity and high efficacy in diverse applications. Because hydrogen peroxide decomposes into water and oxygen, it is more environmentally friendly and safer for operators than traditional bio-decontamination chemicals, such as formaldehyde or chlorine dioxide.

A sensor you can trust

Jos van Daal is a senior engineer and technical director at Van Veldhuijzen. “We used the HPP272 sensor for about 18 months before buying a second Vaisala probe,” says van Daal. “We’ve used the probe extensively and are extremely pleased with its performance.

“Before we had the Vaisala probes, we used other sensors, but they measured  H2O2 vapor only and didn’t measure moisture,” says van Daal. “With our old sensors, sometimes we saw a high concentration of  H2O2 vapor, and sometimes not. I knew it had something to do with the humidity of the air. With the Vaisala probe it’s much easier to manage processes, especially in high humidity. We are often working in conditions that have up to 70 – 80% humidity so the HPP272 was a real gift!”

Van Veldhuijzen often performs bio-decontamination in Biosafety Level 3 laboratories that use biological safety cabinets. BSL-3 labs are commonly used for research on disease-causing pathogens in universities, research clinics, and production facilities. These labs are built so that they can be easily bio-decontaminated; among other containment measures, windows are sealed and the HVAC system must ensure that work area air-flow is separate from areas where infectious agents are handled. Because the air is filtered before it can be recirculated, High Efficiency Particulate Air (HEPA) filters are used to trap 99.97 % of particles 0.3 micrometers (µm) in diameter.

“HEPA filters in the air handling units of bio-safety cabinets are at risk of clogging from high levels of humidity,” says van Daal. “Vaisala’s HPP272 probe helps us ensure against this. We use the probe to pre-test for humidity before a bio-decontamination process. If our test shows the humidity to be higher than 60 -70%, we put in dryers before disinfection. Knowing the humidity in the area ensures that we don’t damage the HEPA filters.

“We put in chemical indicators and run the process until they are colored. We use both chemical and biological indicators to validate.  Since we’ve been using the HPP272, our process time has been greatly reduced; this means less downtime for our customers.”

The impact of humidity on H2O2 ppm

“We use a hydrogen peroxide vapor generator. When we use the generator in a safety cabinet, we can dry the air. After we had the HPP272, we ran a test in a cabinet without the dryer. When the probe indicated 90% relative saturation, we saw the  H2O2 concentration ppm drop quickly,” says Van Daal. “This shows the impact that relative humidity has on relative saturation.” Relative saturation is a unique parameter that indicates the combined humidity of water vapor and  H2O2 vapor. This parameter allows operators to reliably predict when condensation will occur.

“These graphs are from a test we ran with a safety cabinet where the condition cycle was 30 minutes at 2.0 g/min, and the disinfection cycle was 40 minutes at 1.0 g/min. The hydrogen peroxide vapor generator we use is capable of drying the air during cycles. In the beginning, we didn’t use the dryer and as you can see [in the graphs], the concentration goes up until we have a relative saturation value of about 90% and then the concentration goes down even if the relative humidity is 30%. Then the dryer was activated and the concentration went up again. We repeated this a couple of times.” 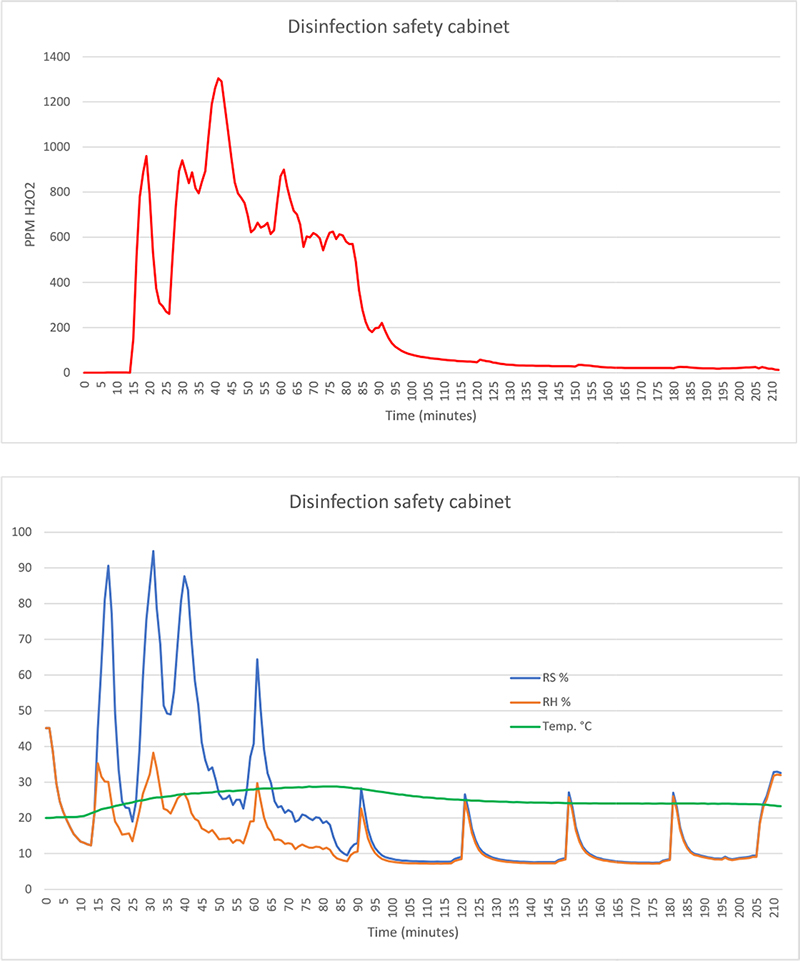 “The graphs show how important it is to know both the relative saturation and relative humidity during a process. This is especially true when disinfecting equipment that has HEPA filters. In a large room, humidity is generally less of an issue. The smaller the area, the more important it is to control the humidity. If you disinfect a room with filters, you want a high concentration; to 1500 or 1600 ppm – for a faster process. But if you can’t see what the humidity is, the filters are at risk.”

“We find the stability of the HPP272 probe excellent. Once we bought the second Vaisala hydrogen peroxide probe, we compared it to the HPP272 we’d been using. Both probes gave the same reading so we saw that our first probe was stable,” says van Daal.

“We use a standard wireless technology designed for low-power digital radio signals to get the data to an interface on a laptop over a mesh network.  The probe is mounted with a battery, microprocessor and small radio so that we can watch results at a distance from the lab and the gas generator.

“Often we are looking at the in-line data remotely, so we set up a wireless system. We have a program on a laptop that broadcasts a request to units we use to obtain data wirelessly from the HPP272 probes. The units within the area under decontamination consist of an Xbee radio module, a microprocessor, an RS232/RS485 serial interface, a battery and the HPP272 probe.

“We also have safety units, outside of the chamber, consisting of an XBee, a microprocessor, an analog-to-digital (ADC) converter, a battery, and a low ppm gas detector. The units within the chamber read the data from the HPP272 and send it to the laptop. The range of the Xbee device depends on the signal obstructions in the environment.”

Learn more about Van Veldhuijzen-Boxmeer Services at their website.

In this 1-hour training with Vaisala's industry experts Piritta Maunu and Sanna Lehtinen discuss the key aspects of measuring humidity in Hydrogen Peroxide bio-decontamination and the importance of understanding role of Relative Saturation measurement and its relation to Relative Humidity in H2O2 processes.

If you have already attended or registered for this webinar, please click here.