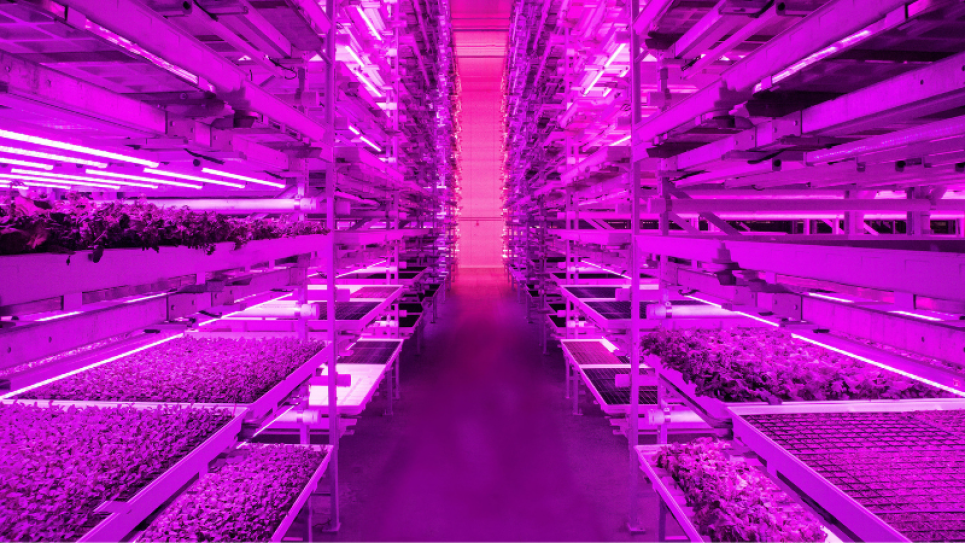 Vertical farming is looking up – quite literally. No sun, no soil, no vast expanse of land? No problem. At least not for indoor vertical farming company Fifth Season.

“When you don’t have to worry about outdoor conditions, you have the benefit of going vertical. We can grow plants year-round in urban areas close to the dense part of a city,” said Fifth Season Cofounder and CTO/COO Brac Webb

Every minute, we’re collecting Vaisala sensor data to measure and maintain the conditions most important for plant growth and using that information to build something special.

Using a sophisticated mix of artificial intelligence (AI), sensors, data modeling and robotics, Fifth Season’s technology tends to each plant’s individual needs at high levels of efficiency and precision. But sensors and their data play the most pivotal role. “The plants are telling us exactly what they want. We just have to adjust to that,’ said Webb. “Every minute, we’re collecting Vaisala sensor data to measure and maintain the conditions most important for plant growth and using that information to build something special.”

The story of Fifth Season is very much the story of the American Dream.

“We really started as a tech company and looked at the vertical farming problem at first and wondered what we can do to help solve some tech problems there,” Webb said. “Much of our evolution is due to the advances of HVAC sensors and LED lights. We already had the programming. So, we said, heck, let’s just do the whole thing.”

Fifth Season is now a 60,000-square-foot, solar-powered vertical farm in the Pittsburgh borough of Braddock, PA. The company’s 25,000-square-foot grow room is equipped with 40 different robots and has 12 levels with more than 125,000 square feet of production capacity. Compared to conventional produce, which can travel thousands of miles by truck or plane, fresh produce grown in local vertical farms need only travel a few miles to reach consumers. The company produces an assortment of leafy greens, arugula and spinach as well as ready-to-eat salads that are sold to a local clientele including Giant Eagle and numerous other retailers. They have also launched a Direct-To-Consumer model on their website.

The company uses its small army of 40 robots to streamline almost every aspect of the vertical growing operation, including storage, retrieval, harvesting, integrated pest and disease management, scouting, seeding, media packaging, and more, according to Webb. Humans are minimally involved in the process, mostly to coordinate the robotic army to execute specific growing recipes or other tasks – which also cuts labor costs from 40% in traditional farms to just 20%.

“We have cutting-edge technology - not using traditional methods, using more of a robotics approach - and a ton of data collection with Vaisala sensors, not only for closed-loop control but also for alerting us to changes in plant growth or the environment,” Webb said.

Total control of the growing environment – 24/7/365 – in small spaces governed by known and emerging technologies are farming’s oft-cited competitive advantages over other types of farming. Vertical farming also is known for efficient resource management. For example, with its hydroponics approach, growing plants in a solution of water and nutrients, Fifth Season uses 97% less land and up to 95% less water than traditional farming.

Vertical farming attempts to take the uncertainties of agriculture – pests, sunlight, soil, etc. – and makes them controllable through various combinations of AI, artificial light, sensor monitoring, climate control systems, etc. Crops are stacked in layers or rows sometimes 20 to 30 feet high. LED lights are used by all vertical farms to create a specific light recipe for each plant, giving the greens the exact spectrum, intensity and frequency needed for photosynthesis. LEDs offer several benefits, such as: exceptional color range, longevity, low radiated heat and energy-efficiency. They can also be recycled and don’t contain any toxic compounds or elements like mercury. Different types of crops prefer different types of lighting. For example, leafy greens and vegetative crops prefer light towards the blue side of the spectrum; whereas fruiting and flowering crops may need something more along the red spectrum.

The peace of mind factor is huge. You get that from Vaisala.... I never once questioned the reading that I’m getting, or that it will be just as consistent tomorrow.

So, why Vaisala? “The peace of mind factor is huge. You get that from Vaisala. If we have issues with our growing environments, all our plants can die. I mean, it could kill our business,” Webb said. “I never once questioned the reading that I’m getting, or that it will be just as consistent tomorrow. But, more than that, it was also the support we received to quickly integrate your technology into our engineering and get everything up and running fast,” Webb added. In fact, tightly controlling and monitoring light, humidity, CO2 and temperature is critically important to Fifth Season. So, data, data, data….

“We have, gosh, probably 360 of Vaisala’s HMP110 humidity and temperature probes and 36 GMP252 CO2 probes distributed throughout the entire growing environment. It’s not just about gathering data in real time. With post-analysis of big data, we can review the growth history of those plants and learn something about them. We may learn, for example, what we thought was the best growing environment for those plants to achieve optimal conditions for taste, quality and yield isn’t the best after all,” Webb said. “And we can course-correct.”

As the world’s population expands, projected to reach 9 billion by 2050, so too does the amount of fruits and vegetables needed to sustain it. There is only so much farmland to accommodate the increase in fresh food required for life. The U.S. Department of Agriculture, investors, and entrepreneurs alike are acknowledging vertical farming as having the potential to strengthen the global food system. And startups like Fifth Season, backed by significant venture capital, are paving the way to deliver new solutions that efficiently deliver fresh and healthy food to people.

“The more we learn, the more we can improve vertical farming,” Webb said, jokingly adding: “If only we can get to the point that the computer could taste the plant.”

The story of Fifth Season is just beginning.

“We’d like to replicate these hyper-local farms. So, it isn’t just about solving the problems of having fresh produce available in Pittsburgh and making sure we can run it here. This farm is a product that we want to be able to deploy in multiple locations all over the United States, all over the world at some point, you know. That’s our grand vision.”

“As a person and an engineer, I always like reading about how (US President) Thomas Jefferson thought agriculture and engineering are intertwined: that agriculture is humanity’s first and foremost engineering problem to solve. You’re helping create jobs in that local area and we have seen how important that is to the economy. Thanks to the technology from Vaisala, you can create an environment that is perfect for the plants and help people too.”