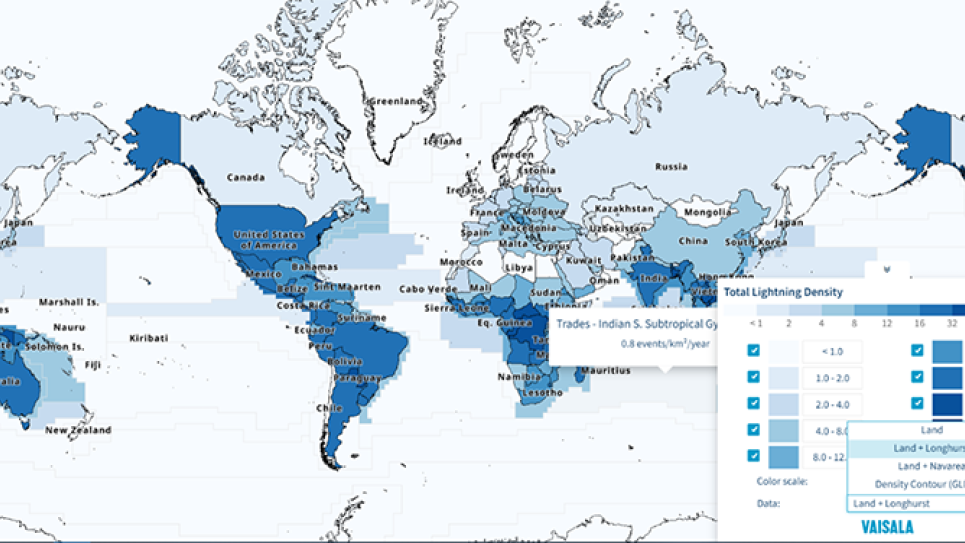 71% of Earth’s surface is covered by water. We use our oceans, lakes, and rivers to transport goods, recreate, and to power our world. Most of the lightning that occurs each year occurs over land, but water activities like going to the beach, boating, and fishing are very risky when thunderstorms are in the area. As we recognize U.S. Lightning Safety Awareness Week, let’s dive into the lightning data and learn more about lightning over maritime regions.

In 2021, we released a world’s first interactive lightning density map. For maritime regions, we calculated density polygons for Longhurst ecological regions and navigation warning areas. A selection for density contour is also available for detailed analysis of average yearly lightning.

Data for the Interactive Lightning Map come from Vaisala’s Global Lightning Dataset GLD360, which offers unparalleled detection performance over every ocean on the planet.

How to stay lightning safe on the water

Thunderstorms are especially dangerous on the water because strong winds and waterspouts make for treacherous boating conditions. On the water, boats and people are usually the tallest objects, making them more prone to be struck by lightning. Energy platforms, like oil and natural gas platforms and offshore wind turbines are significantly taller than the surroundings, substantially increasing their risk in a thunderstorm.

Before working or recreating offshore, check the forecast. If thunderstorms are expected, consider postponing your activity. While on the water, keep an eye on the sky and your lightning data. Vaisala’s National Lightning Detection Network NLDN and GLD360 provide complete coverage of thunderstorms over the water. Seek a safe harbor if thunderstorms approach. If you can’t reach harbor and a thunderstorm is overhead, boats with cabins provide some protection from lightning.

A day on the water doesn’t end until you are safe back on shore. Plan ahead before your excursion and have a safe and enjoyable summer!