101 years ago, a pitcher for the Cleveland Indians was struck by lightning and knocked unconscious with one out left in the game. Luckily, he quickly recovered and finished the game. We know that lightning is a significant risk for anybody outdoors, which happens to be where most baseball games are played.

Each year, more than 2,400 major league baseball games are played across the United States and in Canada between late March and early October, encompassing the peak lightning months across North America. The league averages more than 71 million attendees to its games each year, creating a potentially significant lightning safety risk, but just how big of a risk is there? This year, we were determined to find out. We presented our results at the National Weather Association Annual Meeting last week.

For each baseball game from 2016 through 2019, we searched our National Lightning Detection Network (NLDN) archives for lightning that occurred within eight miles of the ballpark. Eight miles is a frequently used lightning safety threshold for the suspension of college and professional football games. Our analysis included the one hour before the game started, the game time (according to Baseball-Reference.com), and the one hour after the game ended. We included the extra time in the analysis to account for when fans would be entering the stadium or leaving the game.

Our analysis of these more than 9,000 baseball games found 715 games that had lightning within eight miles of the ballpark. NLDN detected more than 175,000 total lightning (in-cloud pulse and cloud-to-ground stroke) events. Only three ballparks did not have any games with lightning – Dodger Stadium, Petco Park, and Oakland Coliseum. This study did not look at whether or when any games were delayed, because that information is not readily available and the goal was just to see how many games had lightning nearby. For maps and lightning statistics from all 30 Major League Baseball teams, check this Twitter thread.

Lightning is a danger to anybody outdoors, whether it is the spectators and vendors or the players, coaches, umpires, and grounds crew. So whether the game is played in an open-air stadium or a ballpark with a fixed or retractable roof, lightning safety is critical. While stadiums with roofs protect people inside, anybody entering or exiting during a thunderstorm could be in danger. For open-air stadiums, the lightning danger is increased any time thunderstorms are in the area.

Although our study looked only at major league games, lightning safety is still important for minor league, college, high school, and little league baseball. No matter the level, remember to keep lightning safety at the forefront so that take me out to the ball game doesn’t turn into one strike and you’re out! 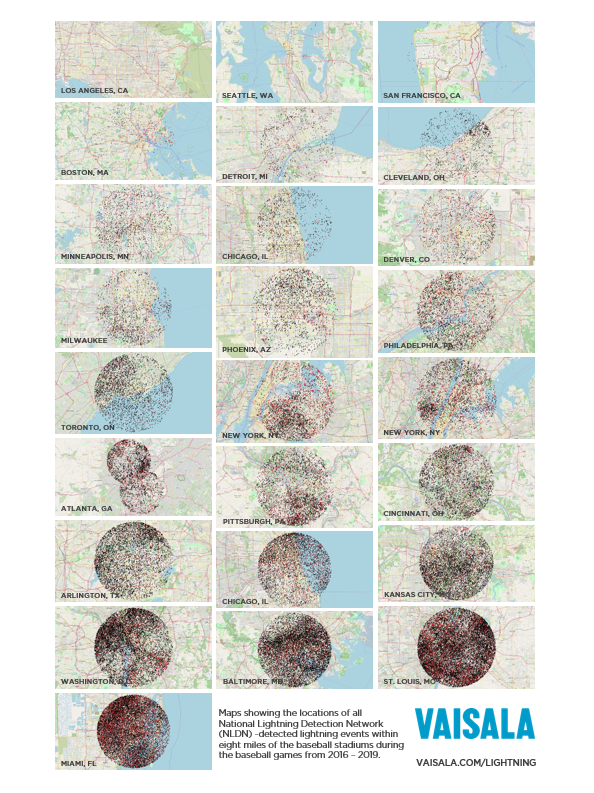