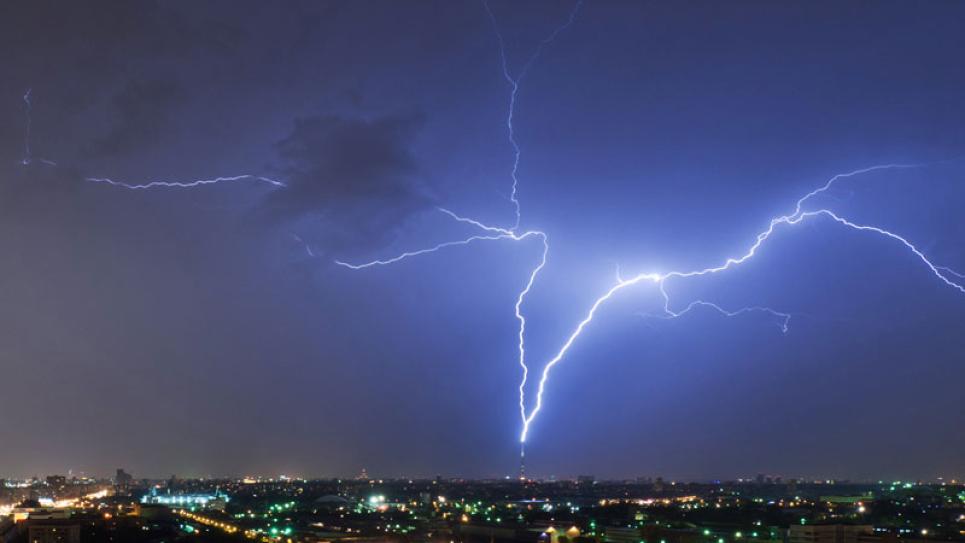 March 19, 2020, is a day that would make Jim Cantore of the Weather Channel excited. While a significant winter storm was occurring across Colorado, US, bringing heavy snow and blizzard conditions, portions of the state were treated to thundersnow – when lightning occurs while it is snowing. Typically, when thundersnow occurs, there are only a few flashes of lightning, but that wasn’t the case today.

Why did so much thundersnow occur?

Well, if you read the title of this blog, you’ll know that we already gave you the answer: lightning was triggered by tall TV and radio station transmitter antennas and wind turbines. Our first clue relating lightning to towers and wind turbines is that the events are tightly clustered. In more natural thunderstorms, lightning is more widespread. The high concentration in small locations suggested to our scientists that this was not naturally produced lightning.

Figure 2: Map showing 260 of the 354 detected lightning events occurring near one of the TV transmitter antennas.

How is lightning triggered by towers and turbines?

During winter storms, the base of the cloud is usually fairly close to the ground. TV and radio transmitter antennas and wind turbines can extend several hundred meters or higher above the ground, putting them near the base of the clouds that pass overhead. If there is electric charge in the cloud that passes over a tall antenna or turbine, the lightning development process is made more efficient since the cloud base and the top of the antenna or turbine are close together. The March 19, 2020, event is noteworthy because of the amount of lightning that occurred.

Vaisala’s engineers and scientists will be reviewing this event in detail because lightning events from TV antenna or other tall towers can help us validate the performance of our network. We will also be examining the overall weather pattern of the winter storm to try and understand why so much lightning is produced, to help the owners of tall antennas, wind turbines, and towers understand how lightning can affect their assets.

For over 30 years, we have created products and services that deliver lightning data that our customers trust to assist their critical decision-making. Our trusted solutions support your operations, whether you want to operate your own network, or rely on lightning data and decision support provided by us.

Thunderstorms, lightning and weather associated with lightning can cause challenges not only for pilots but also for entire airport operations. An airport committed to safety and efficiency is aware of weather's impact on its operations.

Each year we release data from the National Lightning Detection Network and Global Lightning Dataset GLD360 which monitor all lightning activity across the continental United States, as well as globally. Download your copy of the 2019 Annual Lightning Report!

Download the infographic with highlights of the 2019 year of lightning in the continental USA.

Download the ebook with a collection of electrifying fast facts on truths and myths about lightning.