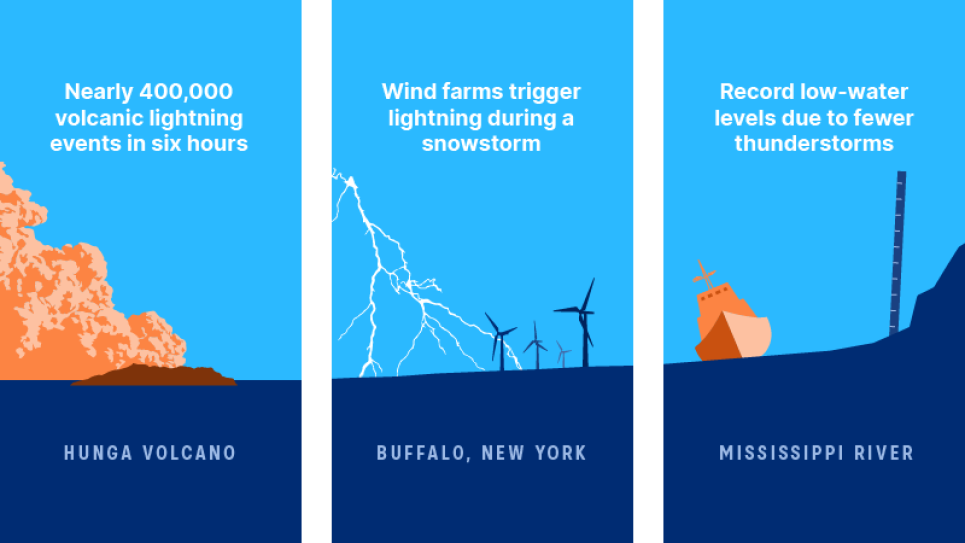 2022 saw the most extreme concentration of lightning ever detected – nearly 400,000 events in just six hours during a record-breaking volcanic eruption. In contrast, the state of Texas saw a significant decrease in lightning activity, and an unusual lack of thunderstorms led to drought across the Mississippi River basin.

Vaisala, a global leader in weather, environmental, and industrial measurements, published its 2022 Annual Lightning Report today. Released each January since 2017, the report highlights the most remarkable lightning events and trends of the previous year. The Vaisala Xweather report reveals a total of 198,227,289 in-cloud and cloud-to-ground lightning events in the continental United States, the highest total count since 2019.

“Even as lightning counts across the continental United States returned closer to average levels, 22 states still saw below-average lightning – including Texas, which saw its count drop by 34% from 2021,” said Chris Vagasky, meteorologist and lightning expert at Vaisala Xweather. “Much of the Mississippi River basin saw below-average lightning as the drought worsened, and the lowest water levels in decades on parts of the Mississippi River had significant impacts on agriculture and river transportation.”

The 2022 Annual Lightning Report highlights in a flash:

The 2022 Annual Lightning Report leverages intelligence from the longest continuously operating and most scientifically validated lightning detection network in the world, Vaisala’s U.S. National Lightning Detection Network (NLDN), and the most comprehensive global lightning detection network, Vaisala’s Global Lightning Dataset GLD360. Supported by more than three decades of unparalleled data history, detection accuracy, and analytical capabilities, the 2022 report is based on the most comprehensive source of global and local lightning data in the world.

“Thunderstorms are life-threatening. Lightning can start wildfires, cause power outages, and damage infrastructure. Monitoring lightning in real-time and analyzing long-term trends is essential for protecting life and property and understanding changes to our climate,” Vagasky concluded.

For more than 30 years, Vaisala’s suite of robust lightning products and services has played an instrumental role in helping people make critical operational and safety decisions based on real-time storm and lightning data. As an ambassador for NOAA’s Weather-Ready Nation, an initiative to ready communities for extreme weather, water, and climate events, Vaisala provides its industry-leading monitoring and measurement intelligence to equip decision-makers to better understand, forecast, and explain changing weather phenomena to help keep people safe.

About Vaisala
Vaisala is a global leader in weather, environmental, and industrial measurements. Building on over 85 years of experience, Vaisala provides observations for a better world, with space-proof technology even exploring Mars and beyond. We are a reliable partner for customers around the world, offering a comprehensive range of innovative observation and measurement products and services. Headquartered in Finland, Vaisala employs over 2,000 professionals worldwide and is listed on the Nasdaq Helsinki stock exchange.

Vaisala Xweather is a leading suite of weather and environmental forecast and observation services using a combination of intelligent sensor hardware and software.