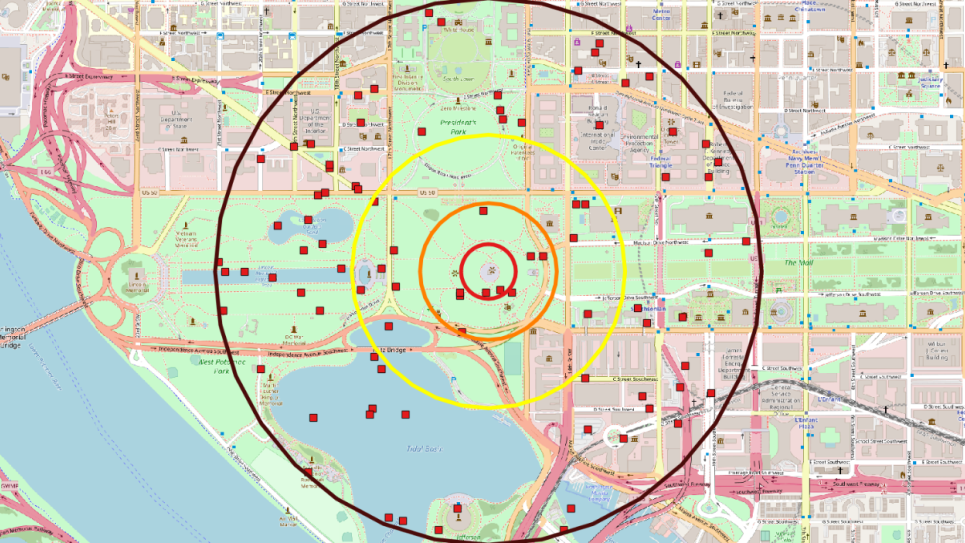 It probably comes as no surprise that those of us at Vaisala made up more than a handful of the more than 11 million views of the Washington Monument being struck by lightning on June 4. It is an extremely impressive video. The Washington Monument is one of more than 100 monuments and memorials that make up the National Mall and Memorial Parks in Washington, D.C., USA. Standing at 555 feet (169 meters) tall, the marble monument built to honor the United States of America’s first president George Washington, is the tallest structure in Washington, D.C. After the monument was struck on Thursday evening, I shared some of our National Lightning Detection Network (NLDN) data from the event, but we wanted to go a little deeper into the event and answer the question on everybody’s mind: how often is the monument struck by lightning?

In re-watching the video, the Washington Monument appears to be hit by two cloud-to-ground (CG) strokes from the same lightning flash. Multiple lightning strokes in rapid succession are why lightning appears to flicker when you watch a thunderstorm. NLDN detects the individual CG lightning strokes and in-cloud lightning pulses. On June 4, NLDN detected both CG strokes just after 8.35 pm Eastern Daylight Time.

So why aren’t the detected lightning strokes right on top of the Washington Monument? One of the metrics that lightning detection networks focus on is their location accuracy, which tells how close to the actual lightning event the network located the lightning. The location accuracy can be affected by how the lightning sensors are distributed throughout the network and how lightning waves travel across the ground. The median location accuracy of NLDN is better than 150 meters, which is the best network accuracy across the contiguous United States. In this instance, NLDN detected one stroke 90 meters and one stroke 130 meters from the monument, both quite accurate locations. Lightning that strikes tall towers helps our scientists and engineers validate the performance of NLDN and Global Lightning Dataset GLD360.

How often is the Washington Monument struck?

In answering this question, I am limiting my search to CG flashes between January 1, 2010 and June 6, 2020. CG flashes consist of one or more CG strokes within 10 kilometers and 500 meters. Looking at the NLDN archives, Washington D.C. averaged 557 CG flashes per year between 2010 and 2019. The average flash density for Washington D.C. is 3.2 flashes per square kilometer. The table below shows each year’s data.

The map below plots all CG flashes (red squares) within 1 kilometer (black line) of the Washington Monument between January 1, 2010 and June 6, 2020. The colored circles surrounding the monument are 500-meter (yellow), 250-meter (orange), and 100-meter (red) distance indicators.