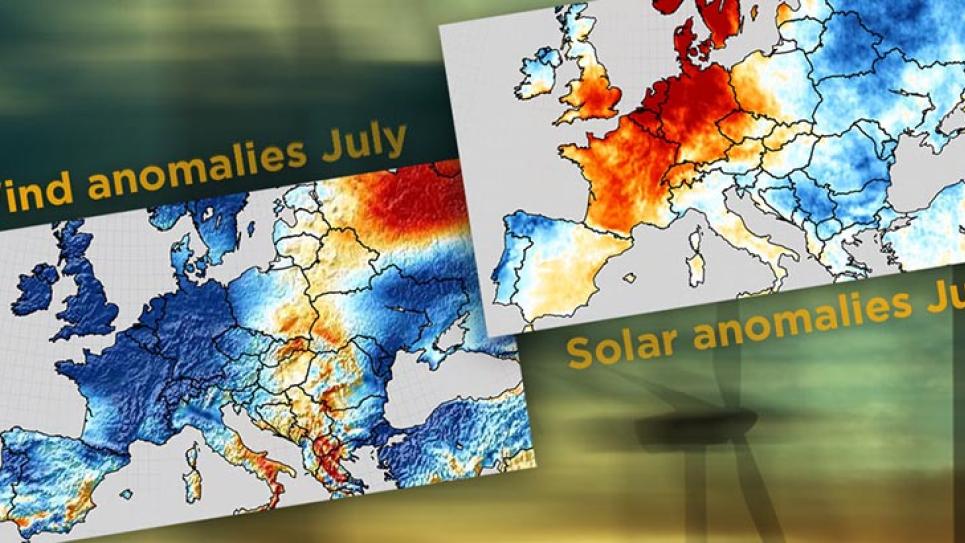 July performance maps highlight importance of balancing clean energy technology for climate resilience. The same meteorological conditions behind the current heatwave in the Western Europe have contributed to a wind drought, negatively impacting wind energy project performance in markets including the UK, France, Spain, Germany and much of Scandinavia. Simultaneously, solar plant performance in many of these markets has increased, in a striking illustration of the balancing effect that can be achieved by building out both technologies as part of a diversified, 'climate-resilient' portfolio.

This is according to wind and solar performance maps of Europe by Vaisala, a global leader in environmental and industrial measurement. The maps show that wind farm operators saw the available resource in July dip by as much as 20% from long-term averages, while solar irradiance in many of the same markets was up to 20% above average.

For wind energy asset owners and operators in the UK, France, Spain and parts of Germany, July's substantially below par wind speeds followed on from similarly low winds in May and June. In Scotland, meanwhile, wind speeds have been uniformly down for the whole seven months of 2018.  This trend is likely to have a long-term impact on the financial performance of Scottish wind farms, and has already been noted in the financial results of major utilities.

The high-pressure system over Europe which has caused these anomalous conditions is expected to persist until October. These conditions follow another notable 'wind drought' across the U.S. in 2015, which had a widespread financial impact.

"The 2015 conditions caused many wind energy investors in the U.S. to think very seriously about how they could diversify their portfolios, not just geographically, but also by technology," said Dr. Pascal Storck, Director of Renewable Energy, Vaisala. "This new data shows that large-scale anomalies are not a one-time occurrence, and it may be time for the European market to follow suit in thinking about how it can become 'climate resilient'."

Stakeholders in the European renewable energy sector should be encouraged by the July 2018 solar irradiance data, showing a negative correlation between deviations in wind speeds and deviations in solar irradiance - i.e. when wind was below average, sunshine was above average.  Vaisala has also determined that correlation pattern holds over the long-term across most of Europe but it varies from region to region as one looks globally (see related article).

"Often wind and solar technologies are played against each other, but the reality is that a diverse portfolio, obtained by building out both, to a large scale, will be the solution to long-term variability of this nature. Energy storage has a role to play in smoothing out fluctuations at an hourly or perhaps daily basis, but using storage to manage variability on a monthly basis is likely to be cost-prohibitive," Storck added.

The importance of diversification was clearly evidenced in Germany, for instance. While the country's installed wind and solar capacity have both increased in the last year, wind energy production for July 2018 was 20% lower than the same month in 2017 - a drop of 1.1 TwH in generation, or the equivalent of a 10 GW reduction in generation capacity (assuming a typical summer capacity factor of 15%). However, this shortfall was more than compensated for by a 26%- or 1.4 TwH - increase in its solar energy production in the same period.

That said, not all markets saw this balancing effect. Portugal, for example, experienced both low winds and low irradiance in July. This highlights the need for robust forecasting and financial planning on a project-by-project basis to account for the impact of site-specific conditions on energy production and returns.

"Ultimately, investment in robust, site-specific weather and climate data remains a critical requirement - particularly as the European market enters a post-subsidy phase in which project margins are getting tighter and the impact of any resource shortfall is felt more keenly than ever," Storck concluded.

To read more about European 2018 wind and solar project performance and view the corresponding maps please see: Does the sun shine more brightly during a wind drought?

Vaisala is a global leader in environmental and industrial measurement. Building on over 80 years of experience, Vaisala provides observations for a better world. We are a reliable partner for customers around the world, offering a comprehensive range of innovative observation and measurement products and services. Headquartered in Finland, Vaisala employs approximately 1,600 professionals worldwide and is listed on the Nasdaq Helsinki stock exchange. www.vaisala.com www.twitter.com/VaisalaGroup