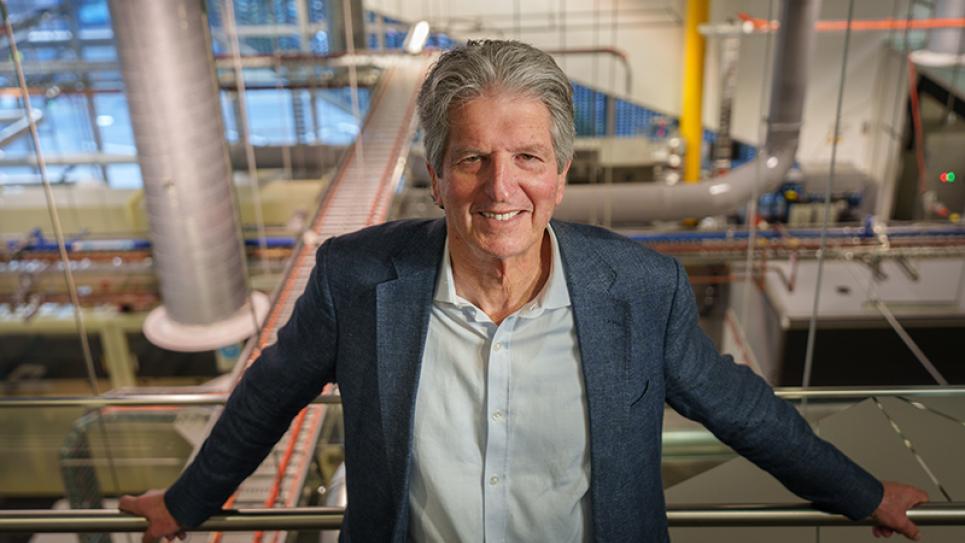 The 2022 Millennium Technology Prize has been awarded to Scientia Professor Martin Green of the UNSW Sydney, Australia, for his innovation that has transformed the production of solar energy.

The EUR 1 million global award for technology, conferred every two years, recognised Green’s leadership in the development of the Passivated Emitter and Rear Cell (PERC). Since its development in 1983, the PERC has gone on to become the most commercially viable and efficient silicon solar cell technology for use in solar panels and for large-scale electricity production, accounting for almost 90% of the global solar cell market.

Green developed the PERC with his team by improving the quality of both the top and the rear surface of standard silicon solar cells.  When sunlight – in the form of particles called photons – enters a cell, it excites the electrons within the silicon. In this excited state, electrons can move through the cell, creating electric current.

The improved surface of the PERC allows the electrons to maintain this excited state – or move freely – for longer, resulting in greater and more efficient energy generation. The PERC has helped increase the conversion efficiency of standard solar cells by over 50% in relative terms from 16.5% in the early 1980s to 25% in the early 2000s.

The innovation has greatly reduced the costs of using solar panels, making solar energy more affordable than fossil-based alternatives. PERCs can also provide an energy supply to homes without them needing to be connected to a grid, ensuring a reliable power supply for remote communities.

Sauli Niinistö, President of the Republic of Finland and Patron of the prize, conferred the Millennium Technology Prize upon Green at a ceremony in Helsinki today.

Professor Green said: “It is a great honour to have been selected to receive such a prestigious prize. It not only recognises my contribution to photovoltaics [the conversion of light into electrical power], but also the achievements of my students and research colleagues at UNSW, as well as those of the broader photovoltaic research and commercial community.

“I believe the Prize will increase my credibility as a spokesperson for what needs to be done to address climate change. We need to switch from fossil fuels to renewable energy to sustain the trajectory of human civilization on our shared planet. The pace of change is accelerating and the world will shift to solar and wind energy over the coming decade. I believe a huge transformation of historic significance is underway.”

Green and his team are currently working on combined cell technologies to reach 40% solar cell efficiency by exploring options such as stacking cells on top of each other.

Green said: “Solar cells are increasingly being used to replace large power stations that use fossil fuels. In 2021, 20 countries or regions including Australia, Chile, Germany, Greece, Italy, Netherlands, Spain, Vietnam and California (US) generated between 8% to 25% of their total electricity supply from solar energy, with this number growing quickly. “The rapid cost reductions in solar energy that my work has facilitated have come just in time, right at the point when the importance of acting immediately to address climate change has become overwhelmingly obvious.”

Professor Minna Palmroth, Chair of the Board of Technology Academy Finland, said: “Professor Green’s innovation has already and will continue to greatly enhance the quality of life for billions of people globally and enhance environmentally sustainable development, from national power grids to private housing.”

Professor Päivi Törmä, Chair of the International Selection Committee of the Millennium Technology Prize, said: “PERCs can help us provide low-cost energy solutions and mitigate climate change. Continued research on solar cells is needed to replace their constituents that have limited supply, such as silver, with more abundant alternatives.”

The 2022 ceremony celebrating Green’s innovation will be held alongside the Millennium Innovation Forum, also hosted by Technology Academy Finland, which runs from October 25-26. The Forum brings together internationally renowned experts to discuss how technology can solve the world’s greatest challenges.

Speakers include Bellingcat’s investigative journalist and Executive Director, Christo Grozev, who implicated the Russian government in the poisoning of opposition leader Alexei Navalny and is currently investigating war crimes being committed by Russia in Ukraine. It also features Tim O’Reilly, Web 2.0 forerunner and Silicon Valley expert; and Marissa Mayer, ex-CEO of Yahoo, and Google’s 20th employee and first female engineer.

About the Millennium Technology Prize:
The €1 million Millennium Technology Prize is the preeminent award focused on technological innovations for a better life. This includes work that improves human well-being, biodiversity, and wider sustainability. Overseen by the Technology Academy Finland, it was first awarded in 2004 and its patron is the President of the Republic of Finland. Winners are selected by a distinguished international panel of experts from academia and industry. Innovations must be backed up by rigorous academic and scientific research and fulfill several criteria, including promoting sustainable development and biodiversity, generating applications with commercial viability, and creating accessible socio-economic value.

Millennium Innovation Forum is organized in Helsinki on October 25-26, 2022, and brings together people from business, academia, and the public sector to discuss new solutions to global problems. Vaisala is part of the Millennium Technology Prize partner network that aims to highlight thought leadership in the fields of technology, innovation, and sustainability.