With today’s growing focus on global warming and the need to reduce energy consumption, evaporative cooling needs to be revisited as an important cooling alternative for buildings, industrial facilities, and gas turbine inlet air. An evaporative cooler uses as little as 1/8th the power of a traditional cooler or chiller system, yet industry has been backing away from the use of this cooling method due to significant disadvantages of legacy technology.

Among the problems are:

AZEVAP, LLC has developed a new and innovative approach utilizing advanced technology that addresses these traditional disadvantages.
At the heart of the AZEVAP technology is the AZFlow® water distribution and metering system. This non-circulating system determines and applies just enough water to the media to makeup for cooling evaporation and achieve the desired cycles of concentration in the discharge water. This is a dramatic change from the conventional recirculating coolers which bath the media with water pumped from a sump. At an average application rate greater than 2.5 times the evaporation rate, a conventional cooler often has water entrainment issues at lower air velocities and increased salinity of the water leading to an increase in the rate of media scaling.

High efficiency even after several years

Published papers on cooling tower media and experience with recirculating coolers using 12” media, show cooler evaporative efficiency degrading relatively quickly over the first couple of months of operation from a high of ~ 80% to less than 70%. AZFlow® coolers have a demonstrated ability to operate scale free and to achieve and maintain efficiencies of 85% to 90% even after several years of operational service without changing or cleaning the media.

As the relative humidity and wet bulb temperature rise, the theoretical amount of cooling that can be achieved by evaporation decreases. Poor efficiencies in conventional coolers further reduce the achieved cooling. The high efficiency of the AZFlow® coolers means they are able to extend their effectiveness under these adverse conditions, that is, the extra several degrees of cooling provided by the AZFlow® system often achieves the desired cooling objective. Th is high efficiency also facilitates the adaptation of the cooler into an effective energy recycle, indirect, and two stage cooler configurations with the addition of an air to air heat exchanger. AZEVAP has married a patent pending air to air heat exchanger design with the AZFlow® cooler to arrive at configurations that yield cool temperatures even under adverse ambient conditions. With this, the historic drawbacks to the use of evaporative cooling have been addressed.

The AZFlow® metered water application system facilitates the elimination of the standing water sumps, recirculating pumps, and water makeup float valve which are the source of several of the deficiencies listed above. Th e AZFlow® metered water application system saves water by both reducing the number of coolers required and reducing the amount of water discharged as bleed water to limit or avoid scale formation.

Th e AZFlow® coolers discharge less than 10% of the water discharged as bleed water by other coolers. With no stagnant water and only fresh chlorinated water used to wet the media, the health issues of stagnant water and growth of mold and fungus are greatly reduced or eliminated.

Leadership in energy and environmental design

The building design and construction industry has instituted the LEED program (Leadership in Energy and Environmental Design) as a way to gauge how effective a building is in supporting energy and water conservation and other environmental sustainability. LEED’S points are awarded for innovation, water saving, energy saving, and elimination of CFC and chemical usage. AZEVAP’s AZFlow® coolers renew the potential for the use of evaporative coolers throughout industry to achieve facility cooling objectives while saving energy, saving water, and reducing greenhouse gas emissions. The AZFlow® coolers provide a means of capturing a number of these points on new and conversion building projects supporting higher levels of LEED certification.

In  order to achieve the maximum benefits of the AZFlow® system , it is critical to have reliable and accurate relative humidity and temperature measurements. After careful evaluation of humidity sensing technologies and manufacturers, the Vaisala HUMICAP® Humidity and Temperature Transmitter Series HMT100 was selected as the measurement and control device.

The measured air temperature and relative humidity along with airflow data are gathered and communicated with an I/O processor to a proprietary algorithm in a Linux-based controller. This algorithm correlates the instantaneous water evaporation rate and the water application rate and delivers the required volume of water across the cooling pad such that the pad never gets too wet or dry. Th e system accomplishes this by determining the on and off times of the water application valve in order to keep the pad saturated.

The AZFlow® cooler came about by designing a low fl ow water distribution system and taking advantage of advancements in control system technology and hardware. In particular, today’s technology enables the sensing of critical parameters that impact the evaporation rate. It also allows the programming of the sophisticated algorithm that accounts for these parameters and their impact on the water evaporation rate into a stand alone micro processor and controller that meters the correct volume of water onto the media. Th is was accomplished using a patented water distribution system with an embedded Opto 22 SNAP control system.

After deploying its AZFLOW® coolers within its own facilities and realizing tremendous productivity, energy, and water savings, AZEVAP has installed coolers in commercial and government facilities. An early version of the AZFlow® cooler installed at the landmark Bank of America office building in downtown Phoenix in 2003 paid for itself in savings in a little more than two months. 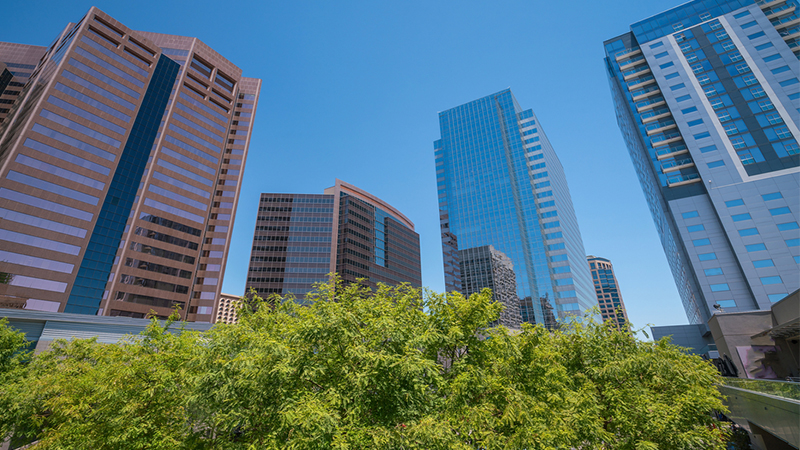