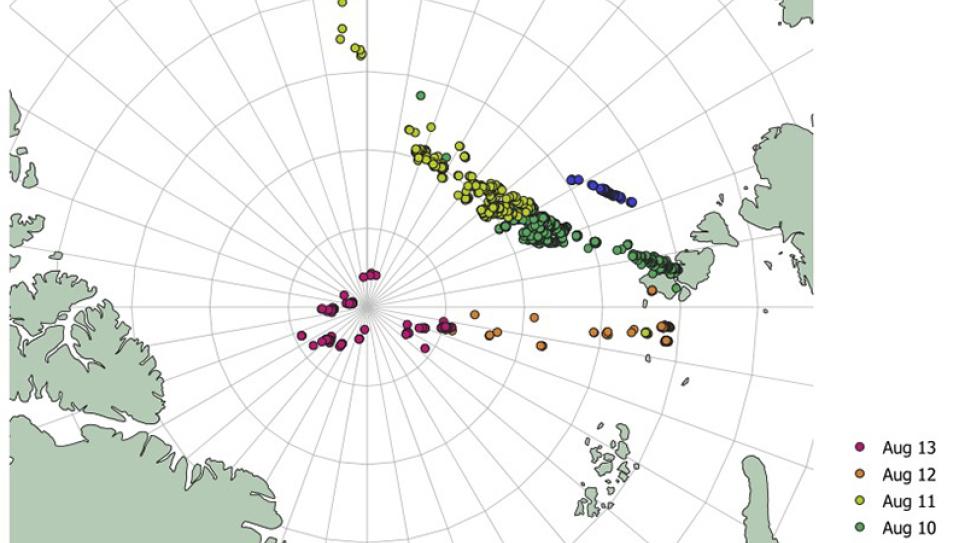 Have you ever been so busy working on a project that you missed something really big? This happened to Vaisala’s Lightning team last summer when we were researching the record-breaking lightning near the North Pole.

The world first learned of an unusually large Arctic thunderstorm from a tweet sent by the NWS Fairbanks Forecast Office in the wee hours of the morning on Sunday, August 11, 2019. A few hours later – 4.31 am Colorado time, to be precise – Chris Vagasky, Digital Lightning Application Manager at Vaisala, sent an email to the Vaisala Lighting team to alert us to this unusual lightning activity. Lightning usually occurs in warmer weather conditions, so it’s not a very common occurrence in the Arctic. Emails flew back and forth among the team for the rest of the day, but the real work began once everybody was back in the office on Monday morning.

Our scientists and data analysts looked at the data, and the storm on August 10-11 had generated over one thousand lightning events, which seemed like more than we’d seen in previous years. To check that hunch, we pulled data for every summer from the previous eight years: 2012 through that day, August 12, 2019. Indeed, there was significantly more lightning north of 80°N latitude in that one storm than in any past year.

This thunderstorm prompted significant interest in the media, with the Washington Post, National Geographic, and Wired, among others, publishing stories about this extraordinary weather. It was a busy week at the office for sure.

While analyzing the data prior to the August storm, our team identified a smaller thunderstorm that had transpired earlier in the summer on June 28. That storm had far fewer lightning events, but happened at a much higher latitude. Because this lightning was so much farther north, we began a huge validation effort to ensure that this data was correct.

Ryan Said, Senior Research Scientist at Vaisala and one of the creators of Vaisala’s GLD360 technology, went into his office to: 1) reprocess the data with a tweaked algorithm that he designed just for this analysis, 2) write custom software to visualize the data on a map, and 3) check third party sources like the National Oceanic and Atmospheric Administration’s JSTAR Mapper to confirm that a storm happened on that date. That was a busy day for him!

It turned out that indeed, it was signal and not noise. After extensive validation by our team, and review from Guinness World Records, the northernmost lightning strike ever recorded was 88.414°N, 52.490°E June 28, 2019 at 16:40:33 UTC, just 177 kilometers from the North Pole.

And that was that, or so we thought. Only months later, in January 2020 while preparing our Annual Lightning Report, did we find another Arctic thunderstorm. Our entire analysis started on August 12 and looked back almost a decade, but we did not revisit the findings. It turned out that while we had our heads down focused on the data on our screens in Colorado, a thunderstorm raged 6,000 kilometers north of us and really, really close to the North Pole. 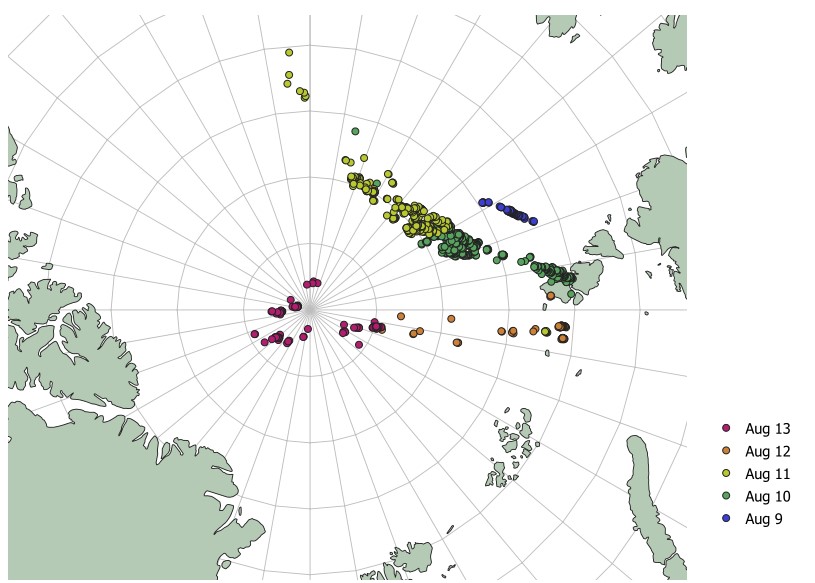 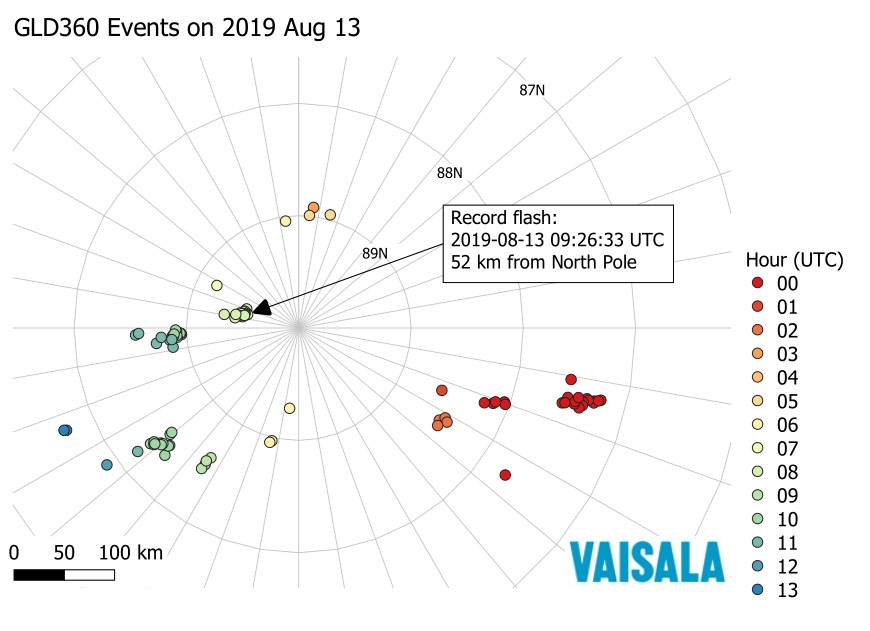 That’s just a quick overview. The International Lightning Detection Conference that will be held this April will have scientific papers that analyze the event in greater detail.

2019 was an exceptional year for Arctic lightning. Vaisala’s Global Lightning Dataset GLD360 recorded more lightning events north of 85°N in 2019 than in 2012-2018 combined, so we plan to conduct regular assessments in 2020 and beyond to provide the most accurate data to scientists studying the area. And of course we’ll have the full year view in our Annual Lightning Report next January.

Very good article, which brings me to the question are the any place in the Artic where it is not possible to detect lightning strikes with the current amount
of sensors?

The reason that I ask is that on Wednesday 19th of August lightning strikes occured a few km southeast of the Thule Base in northwesternmost Greenland, at a litte settlement called Savissivik. Se the image in the link below,

I am a meteorologist from DMI, and we make forecast for Greenland. But i has not been posible for me to find info on
maps showing lightning strikes for northern Greenland. Are they registrered at all? It seems to be out of range from the canadian
network. And will the Ice Cap give "noice" in the area?