Skip to main content
Working at Vaisala
Innovations and Inspirations

Research Scientist Otto Tierto, M.Sc. (Tech), has received an award for his excellent master’s thesis, approved in the Aalto University School of Engineering in 2014. In the thesis project, Otto Tierto designed, constructed and tested a calibration station for a rather new CO2 sensor in the Vaisala offering. The award is granted annually for the best thesis in the field of mechanical engineering by Technology Industries of Finland Centennial Foundation. The sensor in question was developed in 2009–2013 for on-demand HVAC solutions such as GMW80 and GMW90 series. 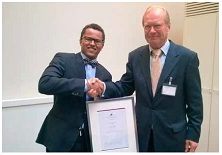 “Otto Tierto has proved exceptional abilities in goal-oriented and well-grounded research. Significant results were achieved already during the research work, and the research opens interesting possibilities in the future,” says Jussi Neuvo, Chair of the award jury.