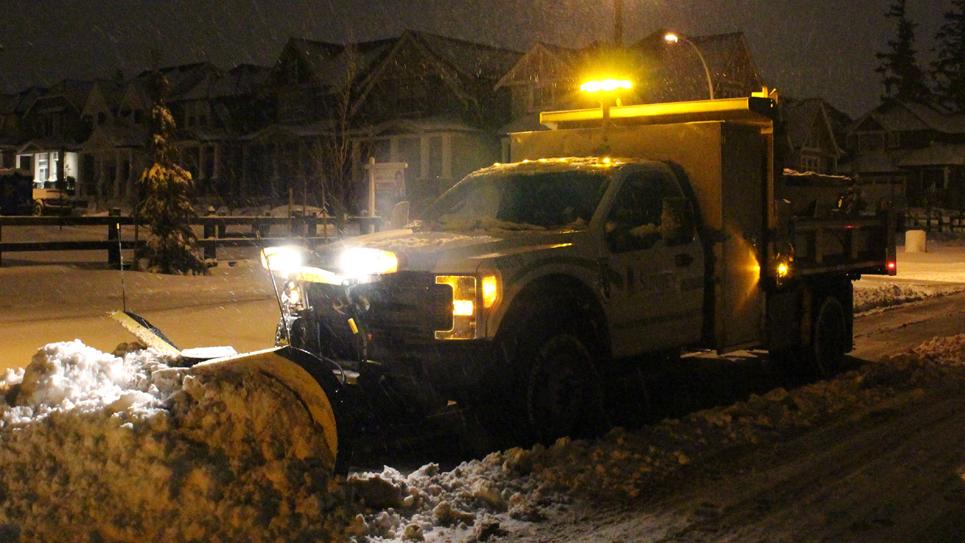 Just north of Seattle, across the U.S.–Canada border, lies the City of Surrey — the largest city by area in the greater Vancouver area of British Columbia. The department managing the city’s roads does it all: winter and summer maintenance plus construction.

The City of Surrey enjoys a moderate climate typical of the Pacific Northwest, with warm and dry summers and mostly rainy winters. The first snow of the season can be tricky for residents and visitors alike, who may be caught off guard by sudden freezing temperatures and hazardous road conditions.

The City of Surrey is known for its technology- and customer- forward approach to road maintenance. But the 2016-17 winter took them by surprise with 54 days of heavy snow and below- freezing temperatures. Network-wide road condition assessments were lengthy and expensive. The only way the City could evaluate the roads was by deploying their fleet to manually check them. Operators relied on visual inspection and past experience to determine what material to apply. This reactive approach led to more time checking road conditions and less time for optimizing their strategy.

The solution: A network of real-time road condition data

The City conducted a study of their road network, and the data revealed seven microclimates. Road conditions can vary in each area during a storm, so the organization sought a solution that would give them insight to current conditions across the network.

The City started by installing a network of five Vaisala Road Weather Information Systems (RWIS), strategically placed in the most critical areas. Right away, the RWIS provided the data they need to understand exactly what is going on with the roads — key for successful decision making.

Soon after the five RWIS were in place, the City decided to expand to a total of ten weather stations for overlapping coverage of their road network. All RWIS provide grip information—a friction co-efficient derived from Vaisala algorithms—which is critical in some areas such as steep slopes, bridges and those with heavy shade.

The City of Surrey has seen a dramatic improvement in their winter maintenance program. The real-time road weather data provided by the RWIS network empowers the department to maintain their roads far more efficiently and proactively — leading to safer roads in less time. No longer dependent on manual assessments, supervisors have the data needed to optimize dispatch. The City also enjoys the ability to make evidence-based decisions to make continual improvements in their maintenance strategy. With better roads during and after winter storms, the City is now experiencing improved service for residents: Proof that they are getting the job done.

"The [RWIS] weather stations were pretty straightforward to set up; we’re impressed with the detail they provide. I also really like using the app on my phone to get road data and reports. This makes my job so much easier!"
Matt Brown, Streets Manager