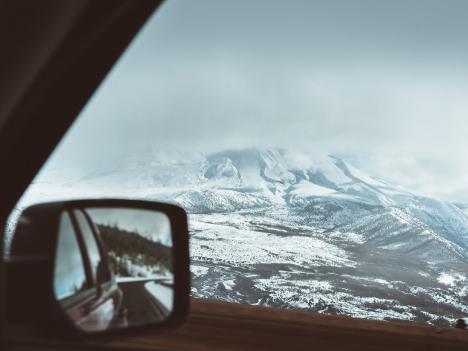 Thermal Mapping is a vehicle-based survey technique, scientifically proven to identify and quantify the distribution of temperature differences across a highway network.

On a typical winter night the differences in temperature across a road or runway network can vary by as much as 10ºC/18ºF. Consequently some sections may be below freezing while others may not.

Thermal Mapping is a process by which the spatial variation of minimum night-time road surface temperature is measured, using a high resolution infrared thermometer. Vaisala Thermal Mapping is the only proven and established technique to determine surface temperature relationships likely to occur across an entire road or runway network. It is a technique, which has been utilized worldwide, to enhance the information available to both highway authorities and supporting forecast providers. Thermal Mapping is an integral part of an effective Ice Prediction system as it provides a mechanism for extending point specific sensor site information between individual weather stations and across a road network.

Thermal Mapping identifies patterns of temperature variation, by undertaking accurate measurements of winter night time surface temperatures across pre-defined sections of a highway or runway network under a range of different weather conditions. This pattern and distribution of warm and cold sections is determined by local environmental factors and prevailing weather conditions. The occurrence of frost or ice is determined by the balance of energy a surface receives and loses in conjunction with the amount of available moisture. This is influenced by the complex relationship between a number of factors including:

The combination of these factors generates a unique temperature fingerprint for each road/runway. Thermal Mapping establishes the relationship between these variables and how they interact under different weather scenarios.

Vaisala has over 20 years experience in the provision and development of Thermal Mapping services. Vaisala expertise is utilized throughout an international client base of more than 1000 users, operating in a variety of different winter climates including; Western Europe, North America, Japan, Eastern Europe, Scandinavia, and New Zealand. Thermal Mapping is now established Best Practice for many highway authorities throughout the world.

Features
Surveys are undertaken by a fleet of specifically equipped vehicles, each mounted with a high resolution infrared thermometer connected to an automatic GPS data logger.
Surveys are normally carried out between the hours of 23:00 and sunrise during the months of November through to April (in the northern hemisphere).
Surveys are carried out under normal road speeds, enabling surveys to be undertaken across different network types and environments including urban, rural, motorway, and airports.
Measurements are normally made at an interval of every five meters. It is possible to change the resolution of data collection depending on network requirements.
During Thermal Mapping surveys detailed observations are undertaken of prevailing meteorological conditions and road surface state.
On sections of Dual Carriageways surveys are normally carried out on the inside lane. However, if there are three lanes or more then surveys are normally undertaken in the center lane.
Before Thermal Mapping surveys are carried out a road/runway network is planned into smaller more manageable sections, by dividing it into c.30-50km Routes. Routes will allow weather conditions to be continuously assessed throughout the survey. The area one vehicle can cover during a survey night is referred to as a Sector. Therefore each Sector is comprised of a number of Routes.
Sectors and Routes always follow a set order and are planned to incorporate a series of overlapping sections. Overlaps allow all the data to be compared and eventually related together (i.e. as one survey).
Thermal Maps are produced using collected data to provide a representation of the relative spatial variation of minimum road surface temperature under different weather conditions, indicating the relative differences as color coded temperature categories.
Thermal Maps can be produced in hard copy or electronic image formats. Thermal Maps are created in a GIS environment, geo-referenced and can be exported for inclusion in GIS platforms if required.
Under an on-going program of research and development, Vaisala continues to advance the Thermal Mapping process. A key part of this is the regular testing and examination of the accuracy and repeatability of Thermal Mapping, the results of which are endorsed in international scientific journals.
Vaisala has established statistical procedures to validate the quality of data, and quantify the similarity between temperature patterns collected during different Thermal Mapping surveys. Such processes demonstrate Vaisala’s Thermal Mapping process is reliable and the temperature variation along a road can always be reproduced under similar weather conditions.
+ Show more

Identification of potentially dangerous sections.
Thermal Mapping provides the temperature relationship across a whole network identifying those sections of the road which are likely to freeze first. This may not be apparent from using road weather stations alone.
Enables selective anti-icing strategies.
Thermal Mapping can identify and allow targeting of those areas in need of treatment, along with providing key input data for Route Optimization.
Identifies the optimum location and number of road weather stations.
Thermal Mapping identifies sections of road with stable thermal characteristics which are representative of a network and/or Climatic Domain, thus identifying optimum locations for weather stations.
Extends ice prediction from site specific weather stations to an entire road network.
Thermal Maps provide information on the relationship of road surface temperatures between weather stations as it enables the extrapolation of minimum temperatures across the whole network.
Provides quantitative reference data.