Carbon fibers are obtained by pyrolysis of an appropriate precursor fiber.

Polyacrylonitrile (PAN) is the mostly used precursor for carbon fiber due to its superior strength and stability, and higher carbon yield. About 90% of the carbon fiber produced is made from PAN and the remaining 10% is made from rayon or petroleum pitch.

The PAN-based carbon fibers are produced by spinning the PAN co-polymer to form the fibers. For this a spinning or a dope solution with a solvent is prepared. Commonly used solvents are dimethyl sulfoxide (DMSO), dimethyl formamide (DMF), dimethyl acetate (DMAc) and sodium thiocyanate. It is crucial to control the concentration of the dope solution to ensure forming of mechanically strong filaments.

The spinning process is important because the internal atomic structure of the fiber is formed during this process. Moreover, the quality of the final fiber depends on different process parameters, such as the composition of the dope and the temperature and concentration of the coagulation bath.

After the fibers are formed, they are further treated by stretching, stabilization, carbonation and graphitization.

Vaisala K-PATENTS® process refractometer monitors in-line the concentration of solvent at different stages of the process.

Learn the details of the production of PAN precursor for carbon fiber production from the application note. 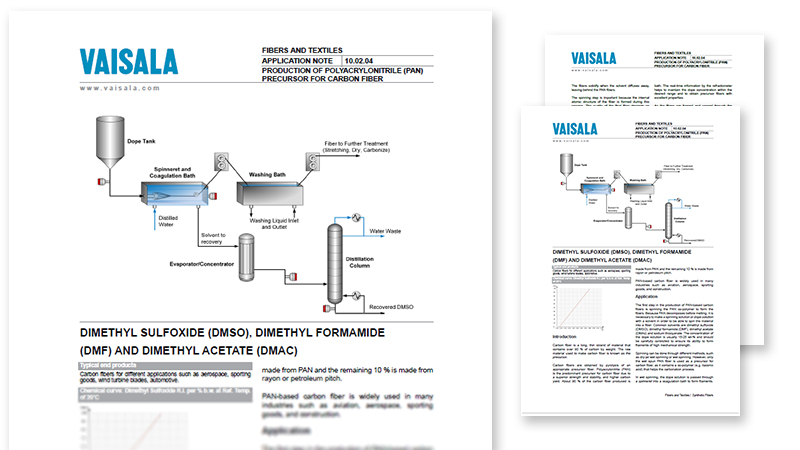