Sulfuric acid and oleum are used for different purposes, e.g. for the production of fertilizers, explosives, dyes, and petroleum products. Sulfuric acid can be sold in the form of various solutions of H2SO4 in water or sulfur trioxide (SO3) in H2SO4 which is known as fuming sulfuric acid or oleum.

Sulfuric acid and oleum are produced industrially by contact process from sulfur containing gases by burning sulfur, acid regeneration, or metallurgical operations. The process consists of the catalytic oxidation of sulfur dioxide (SO2) to SO3, and the hydration of SO3 to H2SO4 by absorption in concentrated acid. There are single or double contact processes at contact plants.

In the Double Contact Process (also known as DCDA, double contact double absorption), the dry SO2 containing gas is fed into the converter. Then, the gases are removed from the third catalytic bed, cooled and passed through the primary absorber where SO3 is absorbed in concentrated sulfuric acid (about 98%). The remaining gases (mostly SO2) are then returned to the fourth bed of the converter.

After the converter the gases continue to the final absorber where once again SO3 is absorbed in concentrated acid. The final product is oleum that is stored in oleum dilution tank and can be diluted with water to receive the desired concentration. The concentration of the liquid is usually kept at 98% to avoid acid scaping from the liquid.

Vaisala K-PATENTS® Process Refractometer is used at the following stages of the sulfuric acid contact process:

In oleum production, the final product is viscous and contains small air bubbles. However, the bubbles, changes in flow or color have no impact on the measurement by the in-line refractometer. The refractometer can withstand the harsh and corrosive environments due to its special wetted parts. It also has intrinsically safe and hazardous area certification.

Lean more details about the contact process for sulfuric acid and oleum from the application note. 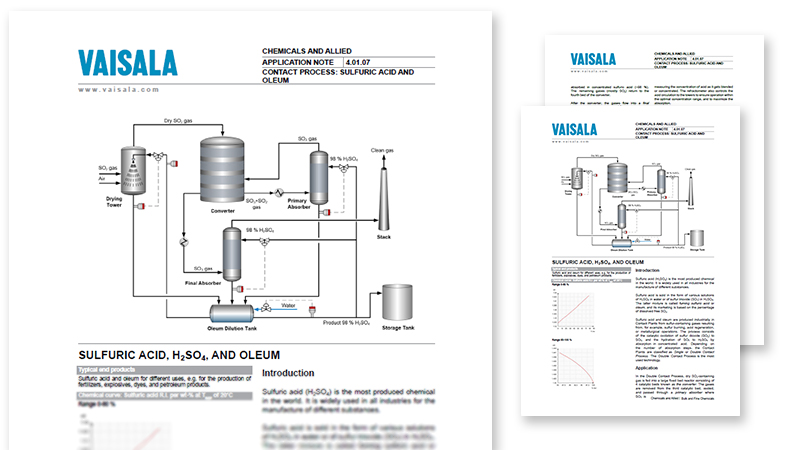