Stillage or residues left from the ethanol (C2H5OH) distillation process contain valuable by-products such as nutrients, minerals and unfermented sugars that can be used as animal feed. The average stillage amount produced in the bioethanol process is approximately 13h/L per h/L of bioethanol.

Decanting centrifuges mechanically dewater the spent grains carried in the stillage. Thin stillage, containing both dissolved and suspended solids, is produced as the centrate. Some of the thin stillage is recycled as backset to the fermentation process. The remaining thin stillage with a concentration of 5 to 10 % b.w., is concentrated in an evaporator to produce distiller’s dried grains (DDGS). At the same time, the decanting centrifuges produce a wet cake of spent grains, or wet distiller’s grains (WDG), which can be used as cattle feed or processed further in a dryer creating DDGS.

Falling film evaporators are used to pre-concentrate the thin stillage. For optimization of the evaporation process, the syrup concentration is monitored by in-line Vaisala K-PATENTS® process refractometer at the evaporator inlet and outlet, resulting in reduced energy consumption and costs.

Learn the details of the process from the application note. 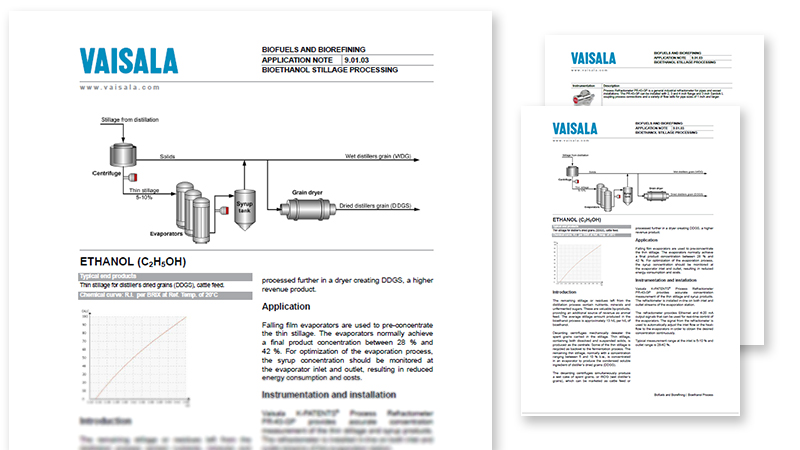