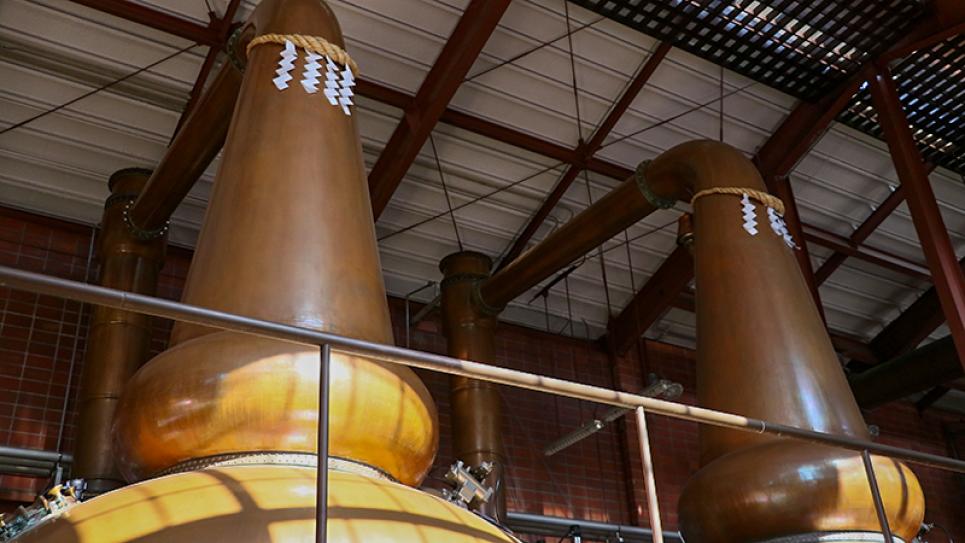 In 1934 the father of Japanese whisky, Masataku Taketsuru, founded Nikka Whisky Distilling Co. Ltd in the Northern Japanese city of Yoichi. He chose Yoichi because its climate is close to that of Scotland, where he himself had learned to make whisky. Yoichi was chosen as the current brand name, and the town is proud of its popularity overseas as a representative of Japanese whisky.

The Nikka Whisky Moji Plant in Southern Japan has a history that goes back more than 100 years, having been founded in 1914 as the "Suzuki Shoten Dairi Distillery". Moji thrived as a port designated by the Japanese government for export in the Meiji era. The still existing red brick plant, designed in a Western style, reflected the state of cutting-edge technology at that time. After various mergers, it became part of Nikka Whisky in 2006 as the main production plant of Asahi Group Holdings for shochu, a traditional Japanese distilled beverage. In recent years the plant has been producing not only shochu, but also whisky and other spirits. As a hybrid plant of Nikka Whisky, it also produces high quality raw sake.

The main product at the Nikka Whisky Moji Plant is Kou-Otsu Konwa Shochu. Kou-Otsu Konwa Shochu is a blend of Otsu-rui shochu and Kou-rui shochu, for a milder flavor that is easier to pair with a variety of meals. However, this requires the careful blending of several different types of unprocessed shochu  which relies on very attentive management to the manufacturing process.

"The beautiful fragrance of our Otsu-rui shochu comes primarily from the ester (fragrant component) produced from yeast," says Iori Takahashi of the Nikka Whisky Moji Plant. "We have to concentrate very carefully during each step – from making koji to distillation. In particular, the fermentation temperature must be constantly controlled according to the fermentation conditions, in order to create a good environment for the yeast fermentation.

Mr. Takahashi points out that the shochu production process involves the use of living raw materials such as koji and a mixture of koji and yeast. For this reason, even with large-scale automated production, many steps still require the skills and five senses of a skilled Shochu Distiller. In addition, the accumulation of knowledge and feedback is the key to being able to precisely control the conditions of producing koji and the amount of water added, in accordance with daily fluctuations in temperature, humidity, and other external environmental factors. Passion of craftmanship still thrives in the state-of-the-art automation process in the Japanese shochu industry.

Prior to the introduction of the in-line refractive index measurement of alcohol concentration, several  laboratory sampling analyses were required just before completion of distillation on each batch. For this reason, the person in charge had to remain on site to work whenever the timing for stopping distillation was approaching. This is a crucial point in the distillation process that, if not handled correctly, can result in failure after the month-long process of koji production, yeast mash fermentation and second fermentation. Sampling measurements, conducted by various personnel, directly affect the quality of shochu and its alcohol concentration. It was clear that accurate numerical control and continuous monitoring would provide consistent quality. However, this would require a high-precision instrument that could handle a wide variety of raw shochu.

In 2020, Vaisala created product-specific calibration settings for the alcohol concentrations of several products at the Nikka Whisky Moji Plant, based on the results of Vaisala refractometer measurements. However, there was some hesitation, because the use of a refractometer to detect alcohol concentration was a new method of measurement for the Nikka Whisky Moji Plant at that time.

"When it was first explained to me, I honestly felt that there was no correlation between a refractive index and alcohol concentration, thus detection is hard to achieve." says Mr. Takahashi. "It is said that 99% of the ingredients contained in shochu are water and ethanol. The quality of shochu is determined by the fragrant ingredient which is contained in the rest 1%. I thought that this slight difference of 1% would have a great effect one refractive index, making it impossible to detect the refractive index linearly."

Additionally, Vaisala’s refractometer prism’s self-cleaning feature was verified through the absence of deterioration in accuracy during the prism's operational lifespan, which had also been a concern. "If we had been unable to confirm the self-cleaning property, we would have considered introducing a CIP cleaning," says Mr. Takahashi. "But, since that wasn't necessary, we were able to keep our capital investment down, which was another major factor in our decision to integrate the Vaisala refractometer into our process."

"The Vaisala refractometer is not affected by air bubbles, and the measured values are stable," comments Mr. Takahashi.

"The stability of the measured values is also very useful when setting the control of the machine." During the two years since they started using the Vaisala refractometer, it has operated smoothly without any regularly occurring trouble, sudden problems, or drifting. "We analyze daily trends in the component values after distillation to make sure we detect the right distillation timing,” says Mr. Takahashi. "However, during these first two years, the values measured in the process have been always stable. Another benefit is that, since there has been no major trouble during operation, there is no running cost."

The perspective of refractive index

In order to continue to make improvements on a daily basis, Vaisala will continue to listen closely to customer feedback regarding the customization of product-specific calibration settings and interface displays for a variety of brands, in preparation for the further expansion of lines. In the future, further automation is expected in the field of food and beverages in order to improve cost efficiency and hygiene.

A new distillation culture arose in Yoichi and Moji a long time ago as a result of integrating the skill and intuition of the master of shochu distiller. With cutting-edge measurement technology from Vaisala, this may actually be happening again a century later. It is our hope that Vaisala's measurement technologies will continue to support improvements across a wide range of sectors, from infrastructure to everyday life and culture.

Vaisala K-PATENTS Process Refractometers can be used for accurate in-line liquid concentration measurement in various industries and applications. The refractometers are available with 3-A sanitary certification and are ideal for hygienic processing.

Vaisala refractometers can be installed in tanks or pipelines with a diameter of 2.5 inches or less. The refractometer can be mounted diagonally, either directly on the outer corner of the bend in a pipe or via a flow cell with a sanitary clamp or a Varivent® connection.

Download our Food Science eBook to discover how measurement data can help to optimize your food and beverage processes.

Learn about our comprehensive solutions for all stages of food production and logistics.