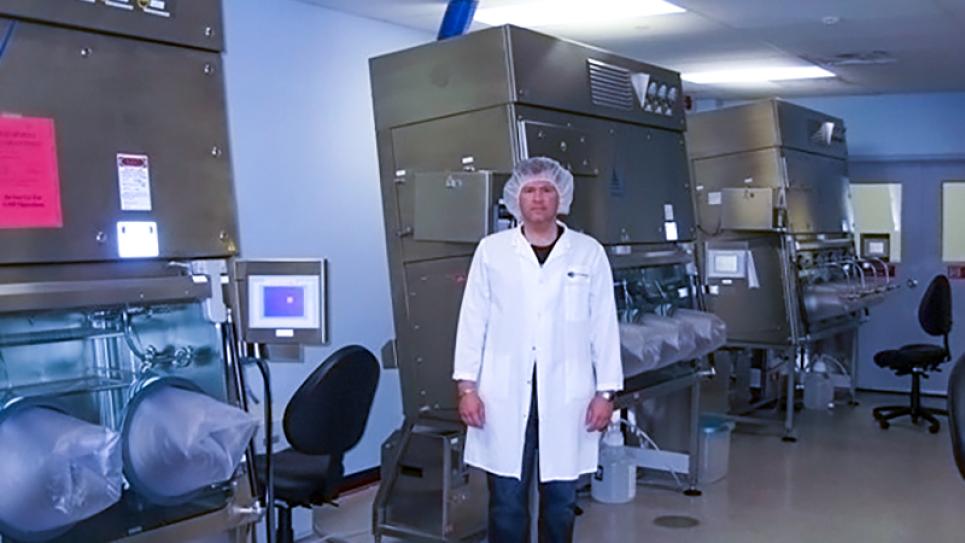 Life Science
Founded in 1994, Ardien Consulting Services provides isolator validation for equipment used in aseptic manufacturing, sterility testing and containment applications. Rick Nieskes is the founder and principal consultant of Ardien, currently serving the validation needs of over 50 pharmaceutical companies around the world. Vaisala supplied Nieskes with a Vaisala HPP272 probe combined with the Indigo201 transmitter for testing purposes.

After working with early hydrogen peroxide bio-decontamination methods in the 90’s, Nieskes decided to specialize in isolation technology and vaporized hydrogen peroxide systems for the pharmaceutical industry. In his work, Nieskes not only qualifies equipment and environments, he develops bio-decontamination cycles and protocols to help companies ensure the consistency and efficacy of their processes.
When given the opportunity to evaluate the Vaisala Hydrogen Peroxide probe combined with the Indigo201 transmitter, Nieskes compared them to his current hydrogen peroxide (H2O2) measurement equipment. The first major difference was that his sensor gave only parts per million readings (ppm), whereas Vaisala’s HPP272 probe with the Indigo201 transmitter was set up to provide three values: H2O2 concentration in ppm, percent relative saturation (humidity) and temperature. Vaisala offers two probes for hydrogen peroxide measurement; the HPP271 probe measures only H2O2 concentration in ppm and the HPP272 probe can measure several parameters, including H2O2 concentration in ppm, relative saturation, relative humidity, temperature, dew point and vapor pressure.
“With both my standard sensor (based on electrochemical technology) and Vaisala’s HPP272 (based on thin-film polymer sensor technology) placed less than a foot apart in the isolator, I began the decontamination cycle,” says Nieskes. “The electrochemical H2O2 concentration sensor initially responded quicker, but within about five to ten minutes both sensors were reading essentially the same values. But, in my experience the numerical value for H2O2 concentration isn’t as important as how relatively consistent it is from cycle to cycle. Both units were consistent throughout the validation.”
While the concentration values were similar, the resolution of the values differed. Both display units began at zero, but for the electrochemical sensor, the first value was 10 ppm, with subsequent values in increments of five. The Vaisala Indigo transmitter, which provided the readings of the HPP272 probe, gave values in 1 ppm increments.
“This became very interesting during aeration,” recalls Nieskes.  “Towards the end of the decontamination phase, both units gave near identical readings. The electrochemical sensor was at 705 ppm, the HPP272 was at 710 ppm. Towards the end of the aeration phase, once the HPP272 was at 2 ppm, I took a reading with a different device I use for low level ppm.
“I use two different devices to measure high and low level hydrogen peroxide concentrations. The low level device gives values between 0.1 and 3 ppm. When the HPP272 was at 2 ppm, the device reading was 1 ppm; and when the HPP272 was at 1 ppm, the device reading was at 0.5 ppm. I was interested to see the consistency between readings, but surprised that in a process that typically requires two different sensing devices for high and low level accuracy, the HPP272 was relatively accurate during all the phases of bio-decontamination.”
Another difference Nieskes noticed was in the number of variables measured during the process. “With the Vaisala unit I’m getting humidity (in this case relative saturation values were selected to be displayed), temperature, along with H2O2 concentration. This gives a more complete picture of what’s occurring and that’s crucial in validation. Seeing the temperature and relative saturation values, along with the level of hydrogen peroxide is not only important for qualifying a piece of equipment; it could be extremely useful for troubleshooting between equipment re-qualifications.”
Nieskes believes that knowing the environmental parameters along with H2O2 ppm values can save time and ensure cycles are effective. “Say that some undetected situation occurs with the HVAC system. If it’s winter, the temperature in the room might decrease. As a result, the ppm during the decontamination cycle may be lower than normal. You might have to do a lot of investigation to figure out that the root cause is the HVAC system.
“In the meantime, there may be more condensation in the isolator, which has caused the lower reading ppm. If you run a cycle with anomalous ppm readings, without knowing the other variables in the environment, you have to take time to investigate the issue. If you can see the other parameters that impact the process in real-time, you have an immediate clue to what’s occurred: one of the variables changed.”
From over two decades working with pharmaceutical manufacturers, Nieskes knows there is constant pressure to control costs. Every step in the process must be as efficient as possible. “If we can ensure consistent bio-decontamination cycles with a better understanding of the critical parameters that affect the process, it leads to more efficient manufacturing,” says Nieskes. “Downstream that can result not only in improved productivity for a manufacturer, but also reduced drug costs for a consumer who can still be assured that the drugs are processed in safe, sterile, and controlled conditions.”
Working in validation, Nieskes has seen the costs associated with presuming that equipment will perform as expected, or that a changing ambient environment won’t have a detrimental impact.

Nieskes has learned that without an H2O2 sensor monitoring bio-decontamination cycles, ignorance is bliss. “I can’t count how many times I’ve seen companies go into a re-qualification and find biological indicator growth-positives. Then they initiate troubleshooting. With an inline sensor, they’d have historical information that can aid in troubleshooting.
“I have experienced a situation where the injection of H2O2 was normal (i.e. no alarm or abort), but was improperly vaporized. In this case, having an H2O2 concentration sensor would have likely identified the faulty condition. This is where knowing the relative saturation and concentration value from the HPP272 sensor can be valuable.”
One of the parameters that was new for Nieskes was the relative saturation percentage. Relative saturation indicates the humidity of the air caused by both H2O2 vapor and water vapor. Under the conditions in this case, Nieskes noticed the onset of condensation occurred around 82%RS. Decades of experience have brought Nieskes to the conclusion that some degree of condensation is necessary for an effective bio-decontamination with hydrogen peroxide vapor.
Prior to using the HPP272, Nieskes used a binary condensation sensor he created for this purpose; experience had taught him that a cycle where no condensation was achieved could result in growth positive biological indicators. Often the condensate is subvisible – the H2O2 vapor exists in two states, at varying degrees, at various locations during the cycle, as both gas and liquid (condensate).
“In the ideal biodecontamination cycle, the isolator temperature and humidity would be exactly the same each time,” says Nieskes. “Since you can’t do that, you have to ‘validate through’ meaning; incorporate room temperature during validation. This shows that you are able to destroy microorganisms through environmental variations. You change the ambient conditions and document the effect.
“Knowing the degree of condensation – or Relative Saturation % – is important. Do you still achieve the kill rate? I look at what the client is able to control and create worst-case conditions. A lot depends on the design of the isolator, the bio-decontamination parameters and the conditions in the room surrounding the isolator.”  Nieskes notes that some equipment has its own system for controlling temperature and humidity to create consistency in the cycle. However, usually the only control is a humidity value less than or equal to a set-point prior to the start of H2O2 vaporization and the amount of H2O2 vaporized. “This is limited information, at best,” says Nieskes. “Say for example you add 120 grams of hydrogen peroxide, for a given duration; what are the other conditions in the isolator? You need to understand the humidity and temperature values throughout each cycle to understand and control it.”
Nieskes has learned that knowing the other dependent variables allows better control of biodecontamination cycles. “If you run a cycle in a room with fluctuating temperature or humidity, it may have an impact on the isolator’s bio-decontamination cycle, in terms of its microbiocidal efficacy or aeration time.”
In his comparison of the electrochemical sensing equipment and Vaisala’s HPP272 probe combined with the Indigo201 transmitter, Nieskes identified several advantages in the Vaisala system, especially the superior resolution of ppm measurement  and the relative saturation value. It was also helpful that the HPP272 was relatively accurate during all the phases of biodecontamination.
Rick Nieskes received no compensation from Vaisala for his testing of the HPP270 probes or Indigo200.
Read more about the comparison of sensors used during a cycle development validation of an isolator on Rick Nieskes’ blog “Inside the Isolator”

Join us for two new webinars for life science applications:

From Monitoring to Controlling with vaporized Hydrogen Peroxide Sensors:  Why, How & a Case Study

We are joined by Cleamix, a provider of Vaporized Hydrogen Peroxide generators, to provide a case study on bio-decontamination. The focus is hospital decontamination, but the process and principles are applicable to any vaporized hydrogen peroxide applications.

In this webinar we present customer cases on how an in-line process refractometer can be used as a PAT tool for standardizing and scaling-up APIs production. You will learn how Refractive Index measurement technology is applied in pharmaceutical reaction, separation and purification, solvent swap, and crystallization operations – first in laboratory and pilot scales and finally in full-scale commercialized production.