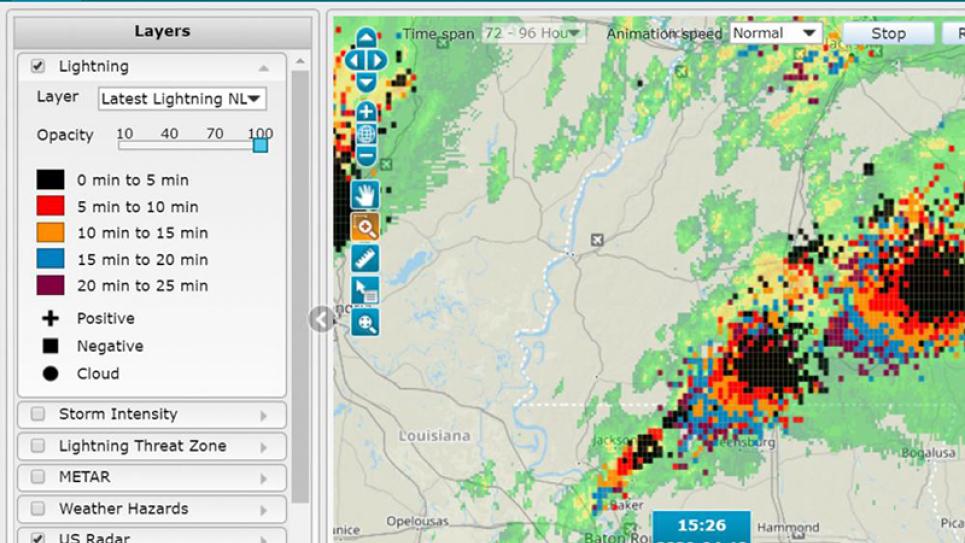 Vaisala is proud to release the latest versions of its lightning detection products, just in time for the summer, when lightning activity is the highest in the Northern Hemisphere.

Five years ago, Vaisala introduced Thunderstorm Manager, the premier lightning tracking application for organizations that need alerts to know when to make changes in their operations to keep people safe from lightning strikes. For the first time, users could see lightning data anywhere around the world in real-time as detected by the GLD360 global lightning detection network.

We’ve made many improvements over the years, and today’s release adds several new features that deliver value to customers for no additional cost. For example, during a storm, lightning displayed on the map updates twice as often, refreshing the view to match the quickly changing situation in a thunderstorm. Also, the alert history has been extended from the previous 24 hours to a full seven-day history, to help operators look back at past events and revise plans to become more efficient when the next storm rolls in. But maybe the most impressive new feature is the faster alerting in the U.S. from the National Lightning Detection Network NLDN. Now users will receive alerts on their screens, in their emails, and via SMS only 12 seconds after the lightning flashes. No other system in the world can beat this speed, which helps our users take quick action to keep their workers safe.

While the real-time view of lightning activity in Thunderstorm Manager is unmatched during a storm, many of our users wanted to conduct a deep dive analysis of the data after the clouds have passed and the sun shines again. So two years ago, our team launched the Lightning Exporter web tool that makes it easy to get the individual ground strike and cloud flash data for any area on the globe with just a few clicks and without writing any lines of code. The updated version released today makes it even easier to identify the location by clicking on the map and then viewing the data on screen before downloading a report to analyze.

While I’m proud to work with such a talented team that creates this elegant software, I’m even prouder of what these tools do in the real world: keep people safe. Whether it’s calling in the baggage handlers at the airport when thunderstorms approach or letting crews get back on the oil rig once the all-clear is sent, our tools help minimize operational downtime while maintaining worker safety. Especially during this extremely difficult time for those industries, we’re glad to do our part by continuing to push the bounds of what is possible with our technology to deliver benefits to our users.