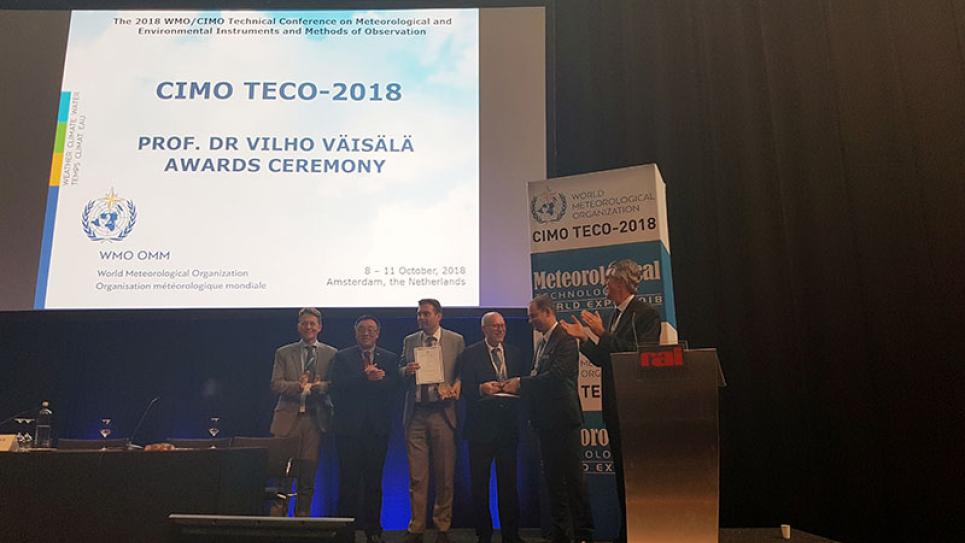 The Professor Vilho Väisälä Award Ceremony was held at the CIMO TECO Conference in conjunction with the Meteorological Technology World Expo event in Amsterdam last week. The awards are granted biannually and administered by the World Meteorological Organization (WMO). At the event, the awards were presented by Kenneth Hörhammer, Vice President, Weather and Environment Europe, Vaisala.

The winners of the Professor Vilho Väisälä Award for an Outstanding Research Paper on Instruments and Methods of Observation are Asko Huuskonen, Mikko Kurri, and Iwan Holleman: Improved analysis of solar signals for differential reflectivity monitoring.

The winners of the Professor Vilho Väisälä Award for the Development and Implementation of Instruments and Methods of Observation in Developing Countries  are Fan Yang, XingHua Yang, Wen Huo, Mamtimin Ali, XinQian Zheng, ChengLong Zhou and Qing He: A continuously weighing, high frequency sand trap: wind tunnel and field evaluations.

“You Never Need to Explain”

Asko Huuskonen, one of the award winners, works as a scientist at the Finnish Meteorological Institute. He has done an impressive amount of research over the decades as well as originally working as a space physicist.

“The research that we did focused on how information from solar signals can be applied as a reference to weather radar calibration. Basically, a weather radar can detect solar signals to calibrate the positioning of the radar antenna. The operative benefit of this measurement is that it’s done close to the horizon where also the most important weather observations are done – this way, the data quality is higher. It is easy to apply this method in all weather radar systems, over 20 MET agencies already use this method. In addition, it has been amazing working as a team where we all have a similar scientific background – meaning you never need to explain what you mean,” Huuskonen described the research team’s work.

History of the Awards

The first Professor Vilho Väisälä Award presentation ceremony took place in 1986 at the Vaisala headquarters in Vantaa, Finland. The presentation of the very first award coincided with the 50th anniversary of the founding of Vaisala Oy. Since 1986, the call for papers eligible for the Professor Vilho Väisälä Award has been made annually to the permanent representatives of the WMO in each country.

For guidelines and criteria for both awards, please visit WMO’s website for the Professor Vilho Väisälä Awards.