Analysis of wind speed trends in Germany for the years 2009-2015 reveals that 2015 was an exceptional year for the German wind energy sector. In the context of proposed policy changes putting the brakes on wind energy investment in the northern states[1], our ​data illustrates that regulators need to look carefully at the year-to-year variability of the wind resource as a key factor in regional decision-making. 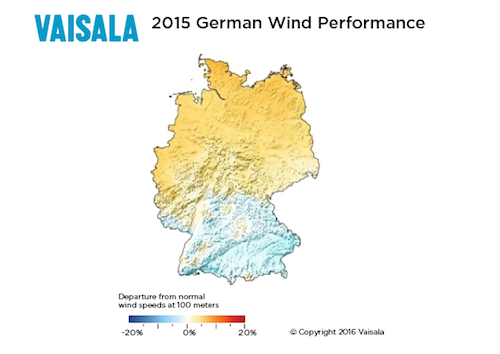 Having experienced rapid wind energy growth in recent years, the German market is currently coming to terms with overcapacity challenges that are putting strain on the grid network. Northern Germany, in particular, has a high proportion of assets in operation and under construction, and considerable investment into north-south transmission infrastructure is required to address this potential bottleneck.

This situation has encouraged calls to limit new wind energy construction in the northern states. However, it is highly important that any such decision not only takes account of installed capacity, but also factors in the impact of inter-annual wind resource fluctuations on actual production.

Vaisala's Wind Performance Maps, released today, show that wind resource in 2015 was up to 10% above average in northern Germany. This is in contrast to most years covered in our 2009-2015 analysis, when the northern states experienced wind speeds below the 40-year long-term average. Production data from the IWR Wind Index confirms that the coastal region of Germany saw a total wind power generation increase of 8.8% in 2015 compared to the previous five years[2].

In just two of the past six years, 2015 and 2011, have wind speeds in Germany risen above this long-term average. In the other four years, wind speeds were either at or slightly below average. In 2010, wind speeds dropped to 8% below average across much of the northern Germany state of Lower Saxony. Production figures for the wider coastal region show a 15% dip in generation for the same period.

The difference in wind speed directly affects the amount of energy produced by a wind farm. Our observations of the impact of wind speed fluctuations on production are further supported by nationwide figures, which show that, while new installed capacity in Germany in 2015 increased by 10% in comparison to 2014, overall wind energy generation increased by 51%[3].

Our performance maps also highlight the difference between northern and southern German states. In 2015, where the whole of northern Germany is above average for wind speeds, much of the country south of Frankfurt, including Baden Württemberg and Bavaria, experienced wind speeds well below average for the nation. This difference in average wind speeds between the two regions highlights the importance of wind farms in northern Germany to energy consumers throughout the country.

"The German government proposal to manage over production of wind power by limiting new capacity over the coming years shall not reduce pressure on the crux of the problem - namely the lack of transmission infrastructure," said Nihat Hünerli, EMEA Regional Manager for Vaisala's energy business unit.

"However, given the role played by North German wind farms in the national energy mix, it is essential that a full understanding of long-term resource variability is achieved prior to any decision to curb investment."

"2015 is an outlier for northern Germany in terms of wind speeds. It's therefore prudent to consider how these results fit into longer-term trends. Since the recent 4100 GWh over-production by wind energy represents a tiny fraction of Germany's more than 600 TWh annual energy production, our maps would suggest that the pace Germany has set for wind development is about right, to continue to meet demand."

Click here to view and download Vaisala's 2009-2015 German Performance Maps. Vaisala experts will also be available for discussion at the Windenergietage event 8-10 November, 2016 in Potsdam, Germany.